Hello. below are a few recommendations for trading in the Forex market on 11.09.2017

EURUSD has not fixed above the level of 1,20500 and formed a pattern Doji. Probably a little went down for a slight correction to the trend line. Then continue the up trend. Sales here against the trend, so they are not considered.

Gold formed a pattern Pin-bar under the level 1349,00. Good growth and will probably start the correction towards the trend line and the area of 1,327. Sales do not see here, waiting for a signal in purchase in the form of patterns of Price Action. 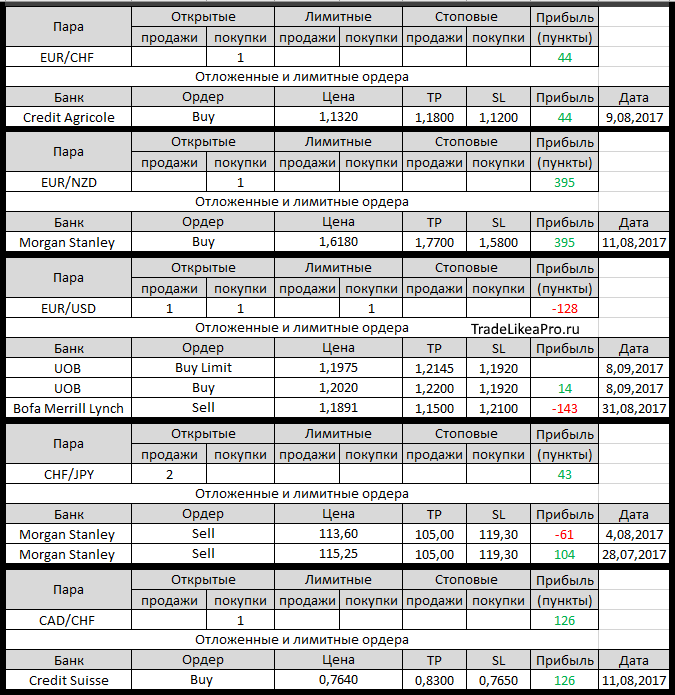 USD rose on growing risk appetite since North Korea decided not to test this weekend. But many investors continue to assess the possible economic consequences from hurricane “Irma”, which toured the coast of Florida and knocked out electricity to more than three million homes and businesses.

Japan’s Nikkei rose 1.4% after Pyongyang decided not to launch another rocket and held a massive feast, where he congratulated scientists and technical professionals, who recently conducted the largest for the DPRK nuclear test. South Korea’s Kospi rose 0.8%, and the widest regional MSCI index rose 0.4%. Too early to say that risks in the Korean Peninsula receded, but at least this week began without any incidents.

USD 108.42 JPY rose from 10-month lows Friday on 107.32. Against a basket of major currencies USD added 0.15% to 91.490, but still close to the 2-12-year low on 91.011 made last week. Outside of the geopolitical agenda, the American currency shows strong growth prospects, given the fed hopes that the Central Bank will raise rates by year-end and a fairly strong economic data released just before the last FOMC meeting.

European stock markets ended last week slightly lower due to weakness in the U.S. currency and tangible gains for the trading currency and the increased risk of further provocations by the DPRK, which could traditionally be realized in the output.

In currency markets, the EUR fell to 1.2017 USD bounced on the background of the probable perekuplennosti after the European Central Bank unexpectedly brought specifics to the question about the tapering of QE. Earlier on Friday, ECB President Draghi said that tapering of the monetary stimulus for the Eurozone could begin in October and end in 2018, the Central Bank, is expected to immediately raise interest rates.