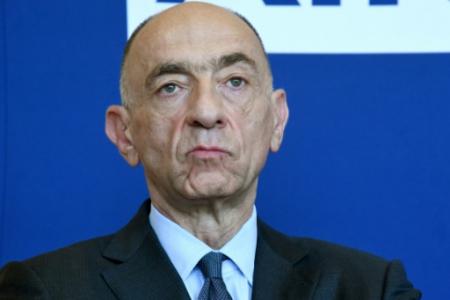 The president of Air France, Jean-Marc Janaillac, during a press conference in Paris on April 20, 2018 (Photo ERIC PIERMONT. AFP)

In an attempt to find a solution to a conflict long and costly on wages, Air France (PA:AIRF) has chosen Friday to bypass the unions by engaging directly with employees, the group CEO Jean-Marc Janaillac, putting his future in the balance.

Describing the conflict, which began in February, “mess irresponsible,” Mr. Janaillac has announced at a press conference a direct consultation of the employees on the draft agreement rejected the day before by the intersyndicale, which has promised further strikes “in early may”.

This project, set to be signed until Friday at noon, was not finally signed by any union representative. It is “null and void”, confirmed to the AFP executive.

This multi-year agreement provided for an increase of 2% immediately and an increase of 5% over the period 2019-2021, compared to 1% in 2018 in two phases initially.

The latest proposal of the trade unions, all trades (pilots, hostesses and stewards, officers at ground level), is about 5.1% increase in two times in 2018 (+3.8% in April and +1.3% in October). They were originally 6%, under the “catch-up” of a six-year freeze of general increases.

“Air France has not the means of a sudden increase in costs,” thundered Mr. Janaillac. “Our social partners must accept this reality and stop living in the past for many years.”

“In the uncertain economic environment (…) only a deal financially realistic can allow Air France to continue with its projects and to catch up,” recalled the CEO.

Mr. Janaillac has subordinated his future at the head of the group for the approval of the employees. If the result of the consultation “is negative, I don’t see how I could stay,” he said.

One of his predecessors, Christian Blanc, had already had to resort to this type of internal consultation to get a plan of restructuring in 1994.

In a press release sent to AFP, Mr. White has welcomed Friday a decision “responsible and adapted to the economic situation of Air France at a time when a very large increase in the price of oil is looming”.

“The French flag did not only capture 10% of the growth in air transport in France in the last 5 years”, stressed the Fnam in a press release, calling the employees of Air France to support the leadership “in its approach to modernization and development.”

The consultation, by electronic means, will be held from 26 April to early may. It will not have any legal value. In the event of a positive vote, the agreement will be represented at the signature and “it will be up to” the unions “take their responsibilities”, said the boss of Air France.

On Thursday, the intersyndicale was called to “accentuate” the mobilization in response to the “ultimatum” of the steering on the signing of the draft agreement. She had promised to announce on the 26th of April, the date of a meeting of the board of directors, “the days of strike planned in early may”.

According to Franck Terner, director general of Air France, the losses for the eleven days of strike action, with the already scheduled Monday and Tuesday next, raising around 300 million euros”.

“A desperate attempt” retorted Philippe Evain, president of the SNPL, majority union among pilots, the announcement of Mr. Janaillac.

“We do not understand this stubbornness” and “we do not see the interest for our CEO to put his departure in the balance”, he told AFP. In any event, the consultation “does not solve the problem of the strike”.

For Vincent Rooms (SGC), with this referendum to “value only symbolic,” for which he is worried about a question-oriented”, Air France stirs “the division between the employees (…) by playing on the fears”. It is also a “denial of democracy” vis-à-vis the unions, he insisted.

Those involved in the movement (SNPL, Spaf, Alter, SNPNC, Unsa-PNC, CFTC, SNGAF, CGT, FO and SUD in the intersyndicale, Unac his side) represent more than 65% of the votes in professional elections.

The agreement proposed by the executive, a “decoy”, “solves nothing,” said for his part, Jérôme Beaurain (SOUTHERN Air). Employees “are not fooled. They want a real catch-up inflation”, he continued, predicting that they would “definitely reject massively” in the text.

Mr. Janaillac has at the same time sent a message to employees, consulted by AFP, in which he mentions a “conflict (who) divides, (the) weak and (the) places in danger”.

Employees are “worried”, they “do not see the end” of this conflict, abounded Beatrice Ict, representative of the CFDT, which, like the CFE-CGC, is not in the strike. Continue this movement, “it is calling into question the sustainability of even” of the company, feared Ronald Noirot (CFE-CGC).