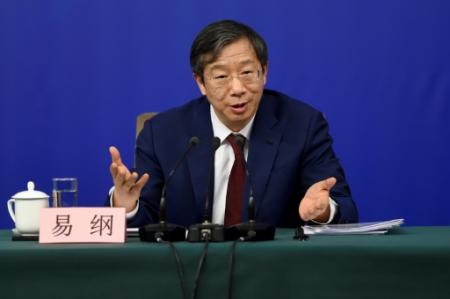 Yi Gang, current vice-governor of the chinese central bank (PBOC), the profile deemed to be reformist, was named Monday to the head of the institution, a sign of continuity at a time when it sees its powers of financial supervision strengthened.

The appointment of Mr. Yi, as governor of the PBOC was approved by a vote almost unanimous of the people’s national Assembly (ANP), the chinese Parliament.

At the same time, the highly influential economic adviser to the president Xi Jinping, Liu He, was elevated to the position of vice-Prime minister, where he is expected to steer the economic and financial policy of the asian giant.

Yi Gang, an economist by training, perfect English-speaking and ex-professor in the United States, where he has long lived, is a connoisseur of the workings of the central bank, where he has worked for two decades.

It replaces Zhou Xiaochuan, caught up to 70 years the age limit: the very reformist governor of the PBOC served in the role since 2002 –a longevity who was the dean of the great prevent it in the world.

As vice-governor since 2008, Yi Gang, had been closely associated with the management of the global financial crisis, and then to the transformations engaged with force by Zhou Xiaochuan: gradual liberalization of lending rates and bank deposits; adjustment of the conversion mechanisms of the yuan to better reflect the fluctuations of the market…

As a result of these efforts, Beijing has been awarded in 2015 by the inclusion of the yuan in the unit of account of the international monetary Fund (IMF), even if the convertibility of the currency remains closely regulated, and its internationalization very limited.

Yi Gang should pursue these guidelines reformist Zhou Xiaochuan, even if, unlike the american federal Reserve (Fed) or the european central Bank (ECB), the PBOC is not independent but is closely subject to the instructions of the communist Party in power.

Mr. Yi, as Zhou Xiaochuan, is distinguished yet, by its very market-friendly: in front of the press in early march, he defended the elimination of the restrictions limiting the participation of foreign investors in financial firms in china.

The PBOC is entrusted with the tasks in part contradictory: it is in charge of driving the deleveraging of the financial system, by targeting the bad debt and the “finance” shadow non-regulated — but without compromising the support of an economic activity still fragile, and employment.

A delicate balancing act, according to analysts.

The appointment of Mr. Yi comes also at a time when the central bank sees its powers strengthened in terms of financial supervision, including skill development of new legislation previously entrusted to the regulatory authorities.

While the debt to the chinese total, public and private, exceeds 250% of GDP, raising the spectre of destabilization of the world’s second largest economy, Beijing has made the fight against the financial risks a “decisive battle”.

Course rare for a top chinese leader, Yi Gang has lived fifteen years in the United States: there was studied between 1980 and 1986 before earning a doctorate in economics from the university of Illinois (north-east), and then to teach until 1994 as an assistant professor at the university of Indiana.

After returning to China, he joined the central bank in 1997, with responsibilities in the crucial department of monetary policy, before being appointed vice-governor in 2008.