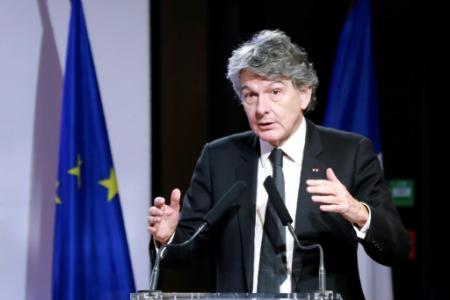 Thierry Breton, chairman of Atos, the headquarters of the Medef in Paris, on January 27, 2017 (Photo JACQUES DEMARTHON. AFP)

The French group Atos (PA:ATOS) announced Monday an offer by which he proposes to acquire its compatriot Gemalto (AS:GTO), a hard, to 4.3 billion euros in order to create “a world leader in cyber security, technology and digital services”.

“We propose to acquire the entire company in a friendly way for 46 euros per share,” announced the CEO of Atos Thierry Breton on Monday evening during a conference call.

This offer represents a premium of 42% on the share price of the group of 8 December, pointed to Atos in a press release.

The acquisition must be carried out “in full in cash, based on the existing cash of Atos and on a loan that has been the subject of firm commitments,” says the text.

Atos has delivered its offer to the Board of directors of the company on 28 November 2017, and Gemalto “thinking” to the operation, said Thierry Breton.

Contacted by AFP on Monday evening, Gemalto did not respond immediately to requests.

The Atos group did not make public this offer as soon but has been forced to do so, following rumours on the stock Exchange, in order”to be consistent with good market practice,” he explained.

This operation would combine Atos, a group of more than 100,000 employees, Gemalto, which has about 15,000 employees.

This new entity would be “by far the leading european player in” on the markets of the payment or of cyber-security, and would allow “a large potential for synergies” in this business, argues the boss of Atos, former minister of Economy and Finance (2005-2007) and former CEO of Thomson and France Telecom.

If the approximation is realized, this new player will also be able to serve all the public, as well private as public, he insisted.

“We share a common DNA”, on these subjects, pointed out the leader, while the two groups are both very present in the United States.

This “grand project of european consolidation has been welcomed positively by the BPI” (editor’s note: Bpifrance, a public investment Bank), which could contribute to the funding of the operation, said Thierry Breton.

As Atos has shown a positive dynamic this year, revising upward its financial targets in the third quarter, as Gemalto has experienced difficulties, notably with the announcement of a plan for the removal of 288 jobs in November.

Beside his consulting activities, systems integration and data center management, Atos was able to take advantage of the craze for the services in the “cloud” (cloud computing) and the growing needs in cybersecurity. It is also one of the few actors to be able to deliver supercomputers, the computing power increases tenfold.

Finally, through its subsidiary Worldline, Atos is also present on the market of electronic payments.

For all of 2017, it expects an increase of turnover above 10% at constant exchange rates, and an operating margin of about 10%.

Gemalto has, however, disappointed investors with a series of warnings on its results this year.

He has indeed suffered an air hole after the up-conversion of late, and very fast – the United States on the smart cards, the many players overwhelmed by the stocks. However, the country accounts for nearly one-quarter of the global market.

And its sales of phone card SIM are also falling and this market is no longer growing in volume and decreasing in value.