The previous week we noted that our målkurs for the Swedish stock market (OMXS30) had been achieved. We issued a clear caveat depending on the upcoming reporting period, but at the same time, the global konjunkturgången rare well correlated and it is easy to underestimate the power of this movement.

In tune with the state of the economy, the global stock market upturn also unusually well-coordinated with the support of the strength both in oil prices and in several base metals. Tensions in Catalonia saw in addition to reduce in favor of dialogue and we durst us, therefore, to raise the bar to 1740 points, i.e. we believed in the further increase of around 5-6 % by year-end.

Today, Wednesday, starting rapportsäsongen seriously and the market will get to shake hands with reality and are calibrated with respect to the new figures. Any form of analysis whether fundamental or technical is put temporarily out of the game when new and unexpected information comes on to the table and even the largest and most genomanalyserade companies can quickly move a few percent up or down in relation to the results and prospects are presented.

The report from Handelsbanken in the morning was a sign of strength, which should benefit the banking sector, but even more important is the result from the verkstadsjätten Atlas (12.00) which is the exchange’s second-largest company and which becomes a guide for the heavy verkstadssektorn.

After fourteen days of continuous rise in the september/October was the stock market undoubtedly overbought and it was almost naturlagsbundet that the market needed rekylera. The question was however, if the stock market had topped, or just a combined strength for further rise. We believed in the latter scenario, and the current behaviour is well in line with our positive view on the stock market.

The recoil has so far lasted eight days, but the loss only amounts to 1.15 % in moderate volume, which is a very moderate decline, which indicates that buyers have the command. Even if we believe in a positive closure of the stock market, you should have a mental preparedness for the coming weeks can be catchy and svårprognosticerade with a quick roll up and down for the individual companies.

The broad Europaindexen are in konsolideringsfaser near the year’s peak levels and as well as in Sweden is on the rise depending of a positive reporting period, but the behavior indicates that the buyers are on the offensive and continue to build up positions before an expected continued upturn. 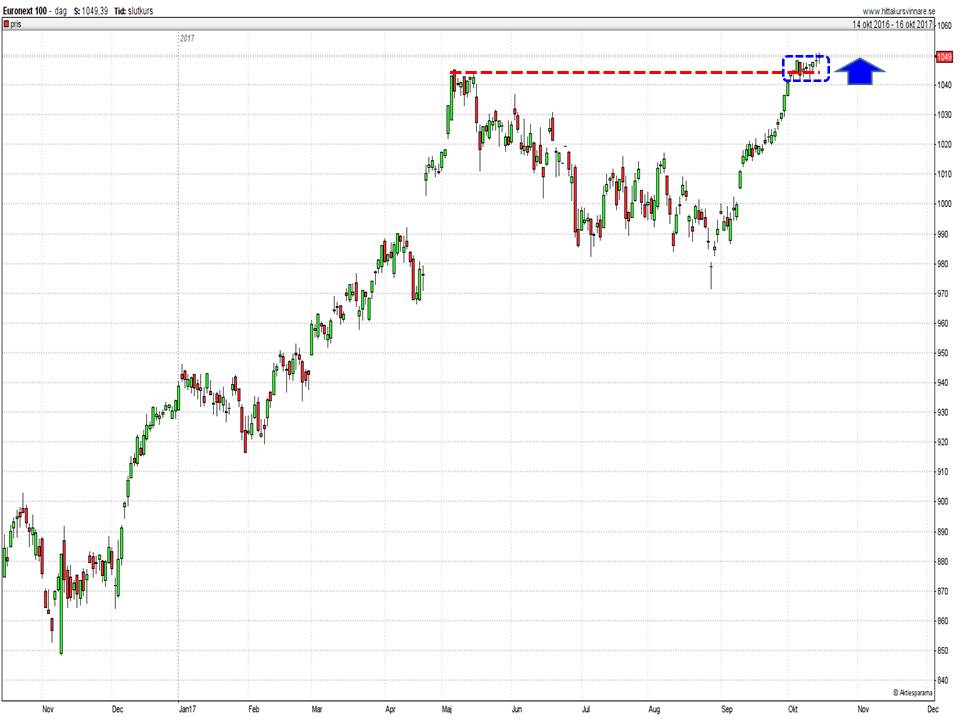 There is no market that clearly stand out in Europe, but Spain is showing indications that the decline is tailing out. Single track from the vote in Catalonia is one (1) sharp nedgångsdag as reverserades fully already the day after. Europe as a whole has shown minimal volatility in over two weeks, and it is obvious that a bigger movement is in faggorna. With reservation for rapportsäsongen we see a good likelihood of a new high for the year, but we let osvuret be best until krutöken from the reports has eased, and the picture has become clearer.

In the united states is the underlying börstrenden persistently positive and the reports have already begun to pour in. They have so far not given any imprint in the index, even if bl.a. Goldman Sachs, Johnson & Johnson and Harley Davidson has outperformed expectations.

In China, the chinese communist party’s congress which starts today to be in focus. What the political leadership says about the future of the growth strategy and the priority themes will be closely followed by the financial market. Already in the morning, it is time for even more information from China, when the figures of the development of GDP, industrial production and retail sales will be published.

The chinese stock market trendar stable up and we believe in the on the rise. India, which moved sideways in the three months after the year-sharp increase shows once again the strength and the challenge is now high for the year this summer. Japan has not disappointed us, but has taken a clear step on the upside and the note thereby tjugoårshögsta (!). Hong Kong continues to pull together in the face of a new uppgångsfas. Singapore, south Korea and Taiwan show similar positive trends, and Asia as a whole indicates thus, as earlier continued potential on the upside. 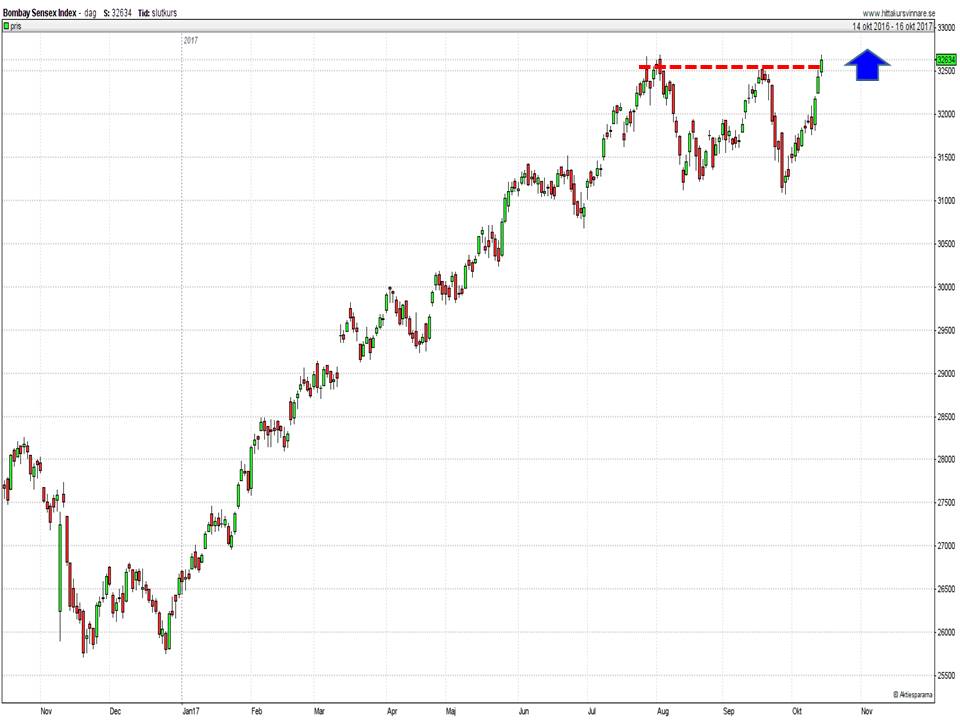 The first attempt for the oil to reach the 60 dollars was not successful even if the price came good near. After a quick rebound, the price has turned upward again and it is clear that the oil trendar to the north, which is why we mostly see it as a matter of time before the oil rises up, over and past the 60 dollars. Copper, which is the main industrimetallen, has risen by nearly 10 % since the beginning of October and we see more potential on the top. 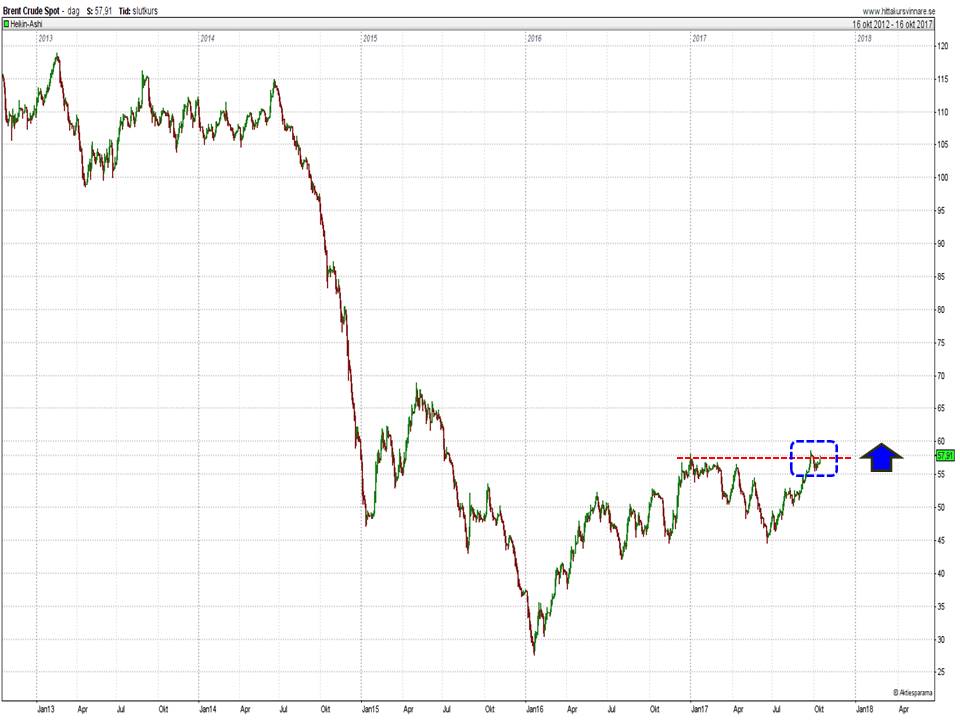 We have a lot of respect for the upcoming rapportsäsongen, but provided that this does not contain too many disappointments, we believe that the global stock markets, with the support of the state of the global economy, rising oil and metal prices and the positive säsongsmönstret afterwards will take up the Swedish stock exchange (OMXS30) in our målkurs of 1740 points (now 1636). 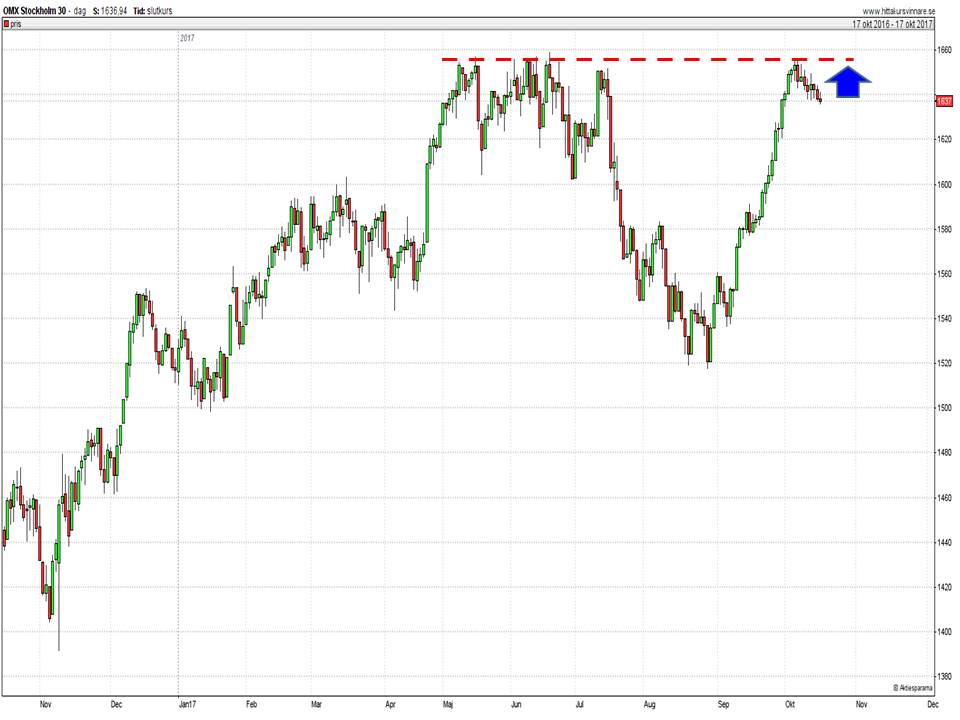