Our conclusion week 29 (21/7) was that we did not believe in any racial or greater decline on the Swedish stock exchange with respect to stock market performance, in our environment, but there was an impenetrable utbudsnivå just above the current indexnivå (OMXS30) with potential sellers that will gladly reduced their holdings and realized gains and losses when the courses are trying to pull themselves up.

Our most likely scenario was a slightly declining stock market with the risk of decline to around 1550 points (minus 3-4 %), but to market forward the time could scratch the new mod and very well reach new peaks before the year’s end. Yesterday closed the stock exchange at 1543 points, and the forecast has thus, on the whole, turned out well.

U.s. S&P 500 is just over 1 % from ”all time high” and even the ”slimmer” the Dow Jones index and tekniktunga the Nasdaq is very close to their toppkurser. The united states got to experience a short-term panic reaction in relation to the temperature relating to north Korea was increased a number of degrees, but just 48 hours later the majority of this decline recovered. 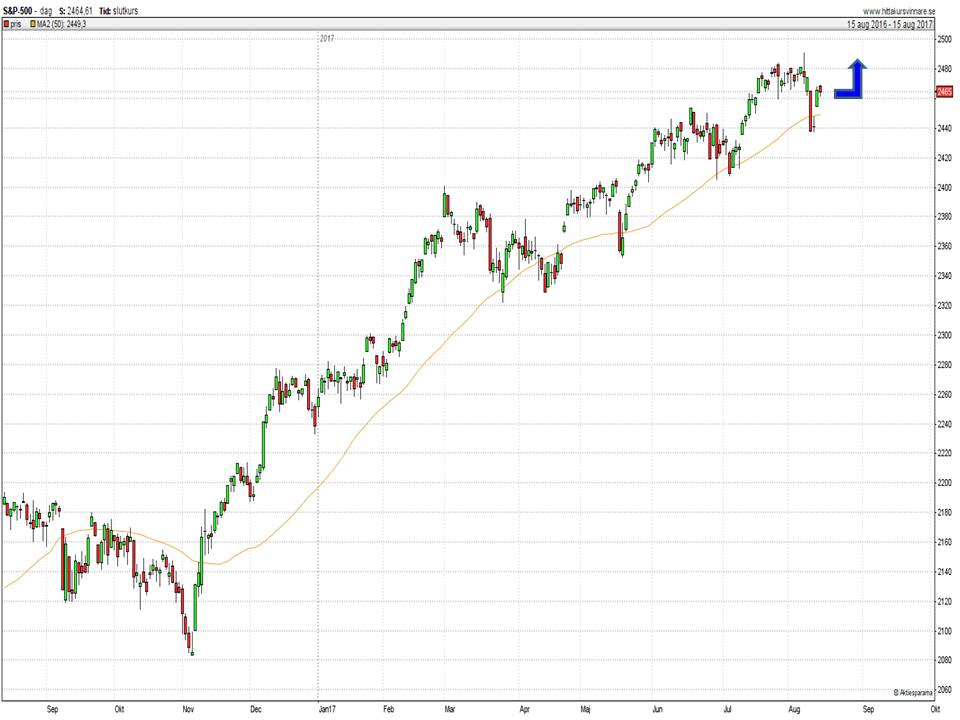 The united states has shown a stable and positive behaviour throughout the current year and this behaviour could very well continue the rest of the year. We do however take one step at a time and let börsbilden develop and crystallize.

The investor community is focusing on in the current moment is whether the united states has the strength to challenge and to pass all-time high from August 8. However, it would be strange if the market did not hesitate, before it is a serious attempt on the upside, then there is still a certain nervousness in the air after the last few days turmoil. The investors want to see is that the index has the ability to bite and stick around the current level and that the volatility decreases, because this would indicate that the next movement is likely to occur on the upside.

Asia ex. Japan, namely India, China, Hong Kong, Singapore, south Korea and Taiwan were all vinnarbörser until Nordkoreaincidenten and regardless of this event was these six markets overbought and in need of a rebound. China has been the most stable, while India and Korea have seen major recoils.

India has been moving relentlessly upward since the end of the year and south Korea and is the neighbor with the ”great successor” Kim Jong-Un. However, we see not a pattern of behavior that indicates reversal of the trend, but the decreases are due to have the form of healthy recoils, which means that they appear more as a purchase instead of säljlägen.

Although most european stock exchanges have been boring with a slightly negative slope since the beginning of may is the long-term trends remain positive. Italy and Austria stand out from the crowd and moves upwards. Holland, Portugal and the Uk are moving mainly sideways and the decreases in Belgium, France, Spain is quiet and restrained, while Germany (burdened bl.a. of the decreases for the four large car manufacturers) shows almost the same negative development in Sweden. 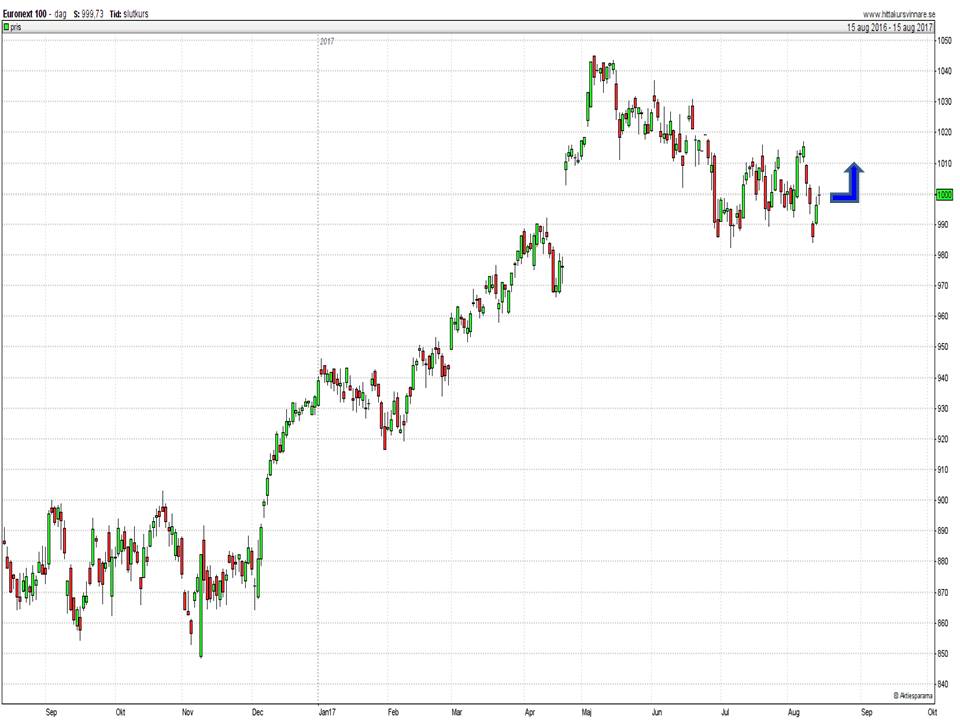 Base metals aluminum, copper, and zinc have had a significantly strong performance in the recent past. Of course, playing the weakening of the us dollar, but the main reason is rising demand. At the moment, the particular aluminum overbought, but in retrospect we see a good probability for further konjunkturledd the rise in all three metals. 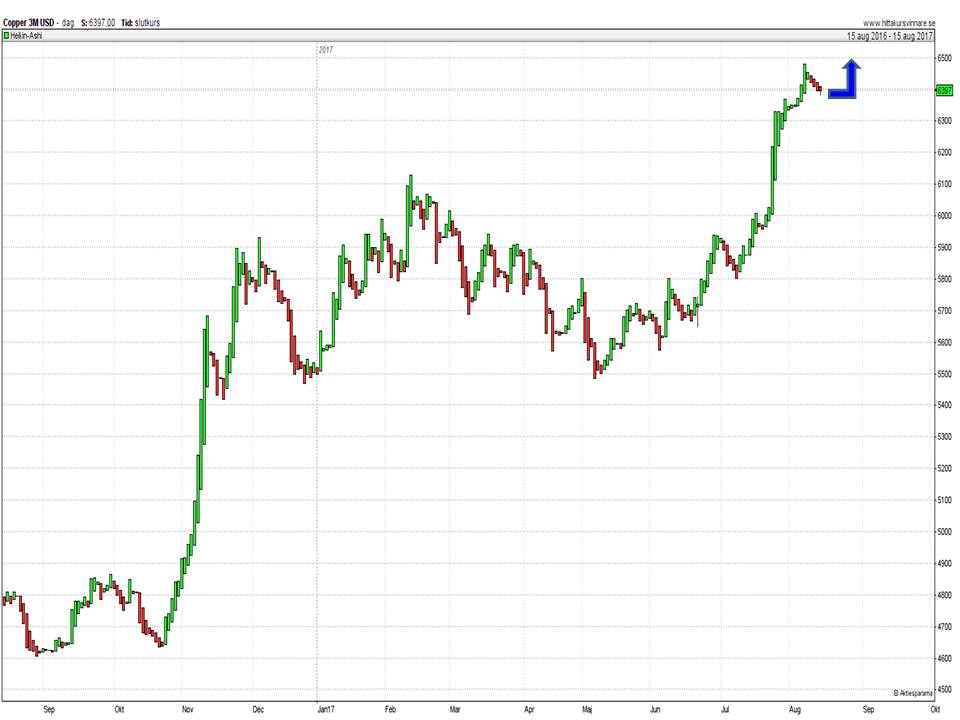 The strong Swedish krona against primarily the dollar exchange rate puts certain restraints on the verkstadsdominerade Swedish stock market, but the strength of the euro against the dollar looks to weaken, which should cause even the Swedish krona’s appreciation soothes not the least of which is the Swedish krona since year-end has already strengthened by 15 %.

The Swedish stock market tend to only a limited extent and for shorter periods deviate towards the global stock market performance. It is extraordinarily rare that Sweden is falling or is rising sharply on its own accord without the larger price movements are almost always correlated with the international börsläget. The last few weeks, however, the OMXS30 been significantly weaker than the other major international stock exchanges Germany the exception.

The market (OMXS30) got a break on the downside in connection with rapportsäsongen then consideration strong numbers for verkstadsbolagen not managed to meet the even higher expectations. Snittnedgången (from the year’s peak levels) for ABB, Autoliv, Assa, Atlas, Sandvik, SKF and Trelleborg is located at around 15 % and pricing has a relatively rough manner adapted to the economic situation. When the workshop form a significant part of the market index to explain this development to a large extent why the Swedish stock market has developed the equipment since the middle of July. 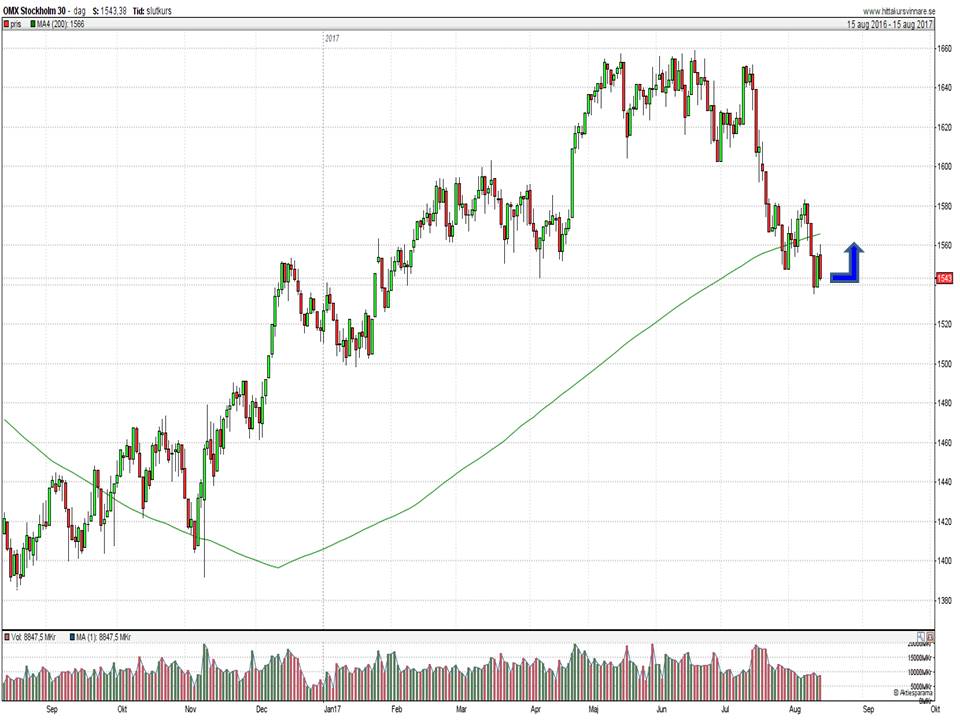 We are now seeing more buying than säljlägen in verkstadssektorn and with the support of the stable banking sector, rising metal prices and a positive outlook on the international stock markets, we believe that the decline in the stock market is tailing out. Before we become clearly positive, we want to see more strength in Europe and the united states, which can be the case already during the current week.