Our conclusion last week was that the U.S. and Europe as well as Sweden saw out the need to consolidate further a certain period of time, but that during the month of June was likely to be the OMXS30 in tune with the development of the above markets would make a serious attempt to pass the high for the year.

We were thus comfortable with our målkurs about 1700 points, and thought it the usual weak säsongsmönstret during the summer, this year could be challenged.

Already the day after our publication (2/6) were challenged high for the year on the one hundredth once, but the stock market was, as expected, is not yet ripe for the higher elevations. The markets are moving sideways most of the time the actual uppgångsfaserna usually occurs during relatively short periods of time.

These uppgångsfaser means that the stock markets become overbought once the courses rises too much too quickly and causes an inclination in the trend, which is long-term unsustainable. This överköpthet can then be corrected quickly by a rebound or slowly through a lateral movement or by a combination of these two patterns of behavior.

The Swedish stock market performed strongly during the first half of February, but was then slowly down, in around two months ‘ time, and then rise slightly explosive in connection with the first round of the French presidential election and the reporting period for the first quarter. This uppgångsfas has still not been corrected fully, but we like the current behaviour, which is characterised by what we call positive psychological dynamics.

This is no advanced flockpsykologi but only shows that the buyers (hausseflocken) has the upper hand over the sellers (baisseflocken) as the upturn was clear and quick, while the correction has been modest, restrained and relatively slow in nature, why do we think that we are witnessing a kraftsamlingsfas facing a sommaruppgång. More on this in the conclusion but first a global outlook….

Of course, moves markets, not always under the ”some research” and development in the united states (S&P 500) is an excellent example of this. During the first half of may, the market is stuck in the top of their tradingintervall which has been in force during the two-month period of time. The Index, however, fell unexpectedly very quickly from the top to the bottom of the range, but tvärvände then up and rose six days in a row. 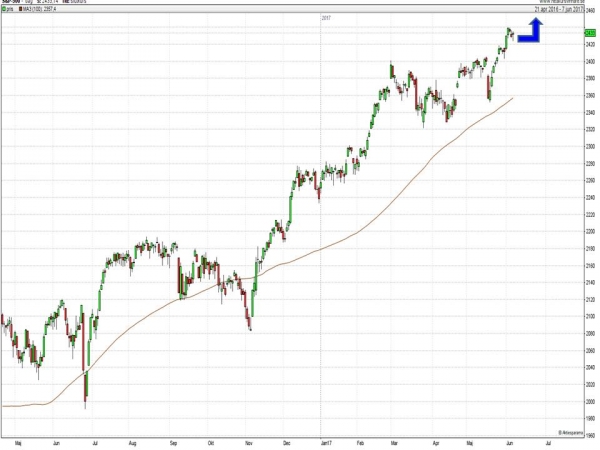 After a few days of break just above the top of the interval has then the S&P 500 made a new jolt upwards and is currently in a soft rekylfas that is not likely to be long-lasting. The u.s. market is thus in a new uppgångsfas, which will affect the european stock markets positively.

Europe as a whole draws itself quietly and gently down, and this is not negative, but patterns of behavior indicates that there is underlying strength, but to överköptheten after the French valyran, as well as in Sweden, still has not been fully evaporerat.

There is thus still a trendanpassning and when this during the first half of June should be passed, we see – most likely in symbiosis with the development in the united states – a good opportunity for further rise. The major exchanges in Europe are relatively similar, with Germany as its guiding principle, and when this market manages to break new ground on the upside and move towards ”uncharted territory” teach the rest of Europe including Sweden keep up with the German powerhouse up. 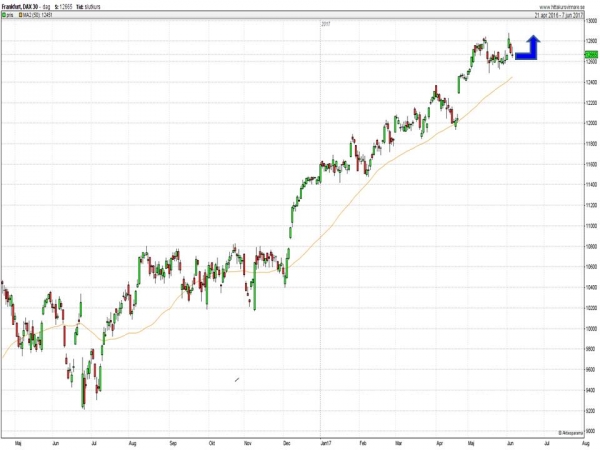 As we wrote last week we were almost about to give up on China, but in recent weeks, the return of börsoptimism has meant that we followed the China, extra careful. The positive image that the performances have become firmer in the path and the newfound strength is likely to be genuine. We believe, therefore, that China is going to leave the last two years, lethargy, and see significant potential on the upside

Japan has a positive root, but continues to vela because of the weakness of the dollar, while India is committed in its triumphal progress on the upside. Hong Kong, south Korea and Taiwan trendar stubbornly upward, but keep your eyes on Singapore looks to be on the road to catch up with their neighbors. The movements in the price of oil continues to be unusually volatile, with some negative direction and Russia is thus among the losers in the international börsscenen. 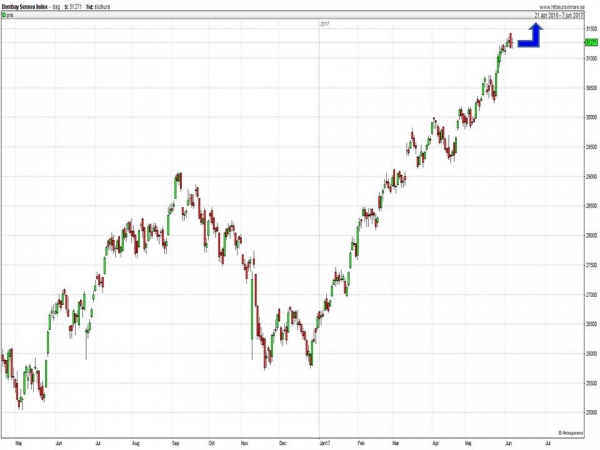 The united states and Europe as well as Sweden looks to have to consolidate further a certain period of time, but there is a clear positive undertone with kind assistance from the greater part of Asia. Disquieting sign in the form of weakening of oil and basmetallpriser, a wobbly/weak us dollar and a positive development for the gold price in combination with high-valued companies, however, must be taken into account. However, it is easy to underestimate how long strong trends can be in force.

When we study the investerarkollektivets behaviour, this is well in step with our positive view on the stock market trends and the conclusion is identical with the previous week, i.e. during the month of June, it is likely that the OMXS30 in tune with the development of the above markets will make a serious attempt to pass the high for the year. Thus, we are comfortable with our målkurs about 1700 points (now 1640) and believe that it is customary weak säsongsmönstret during the summer will be challenged. 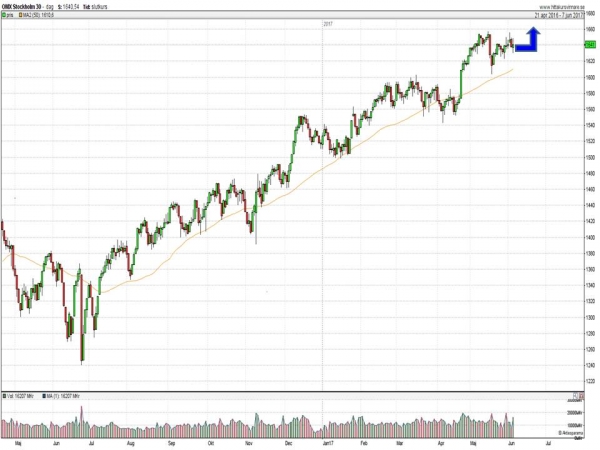