The OMXS30 has previously been given strong sell signals when it is in the high trading activity went below the support at about 1600. Therefore, there is a significant risk that the long-term trend is turning down. Short-term speaking, however, the OMXS30 oversold and have also come down to strong assisted at about 1540-1550. A short-term upward movement in the low trading activity would therefore be natural. The OMXS30 has motståndsområden at about 1580-1585, and about 1600-1610, which then can be tested. If the OMXS30 despite the oversold situation goes under the supports at about 1540-1550 obtained new sell signals. The next strong support area is at about 1500. Strong buy signals is obtained only if the OMXS30 during a growing börsaktivitet establishes itself over the resistors at about 1600 and about 1657.

The stockholm stock exchange continued last week to go down. However, in the slightly lower börsaktivitet than the week before. Storbolagsindexet OMXS30 index fell 1.5 per cent and closed the week at 1557,56. This year the rise on the OMXS30 index is therefore +2.7 per cent. And included secluded dividends is the rise of +5.9%.

Among individual OMXS30 shares , it was during the week, especially Astra Zeneca, which stood out with a decline in the whole of 13.9 per cent. This, after the negative news regarding the important Mystic-the study.

What particularly worsened stock market situation is enough to investors all over the world more and more have begun to worry about what will happen when central banks start to tighten their previously expansive monetary policy. Pengaströmmen the past few years, caused a surplus of new venture capital are now at risk thus to their. And it is not good for stock prices.

Earlier in the month has, for example, bolagsrapporterna, as well, was quite ok, not managed to keep börshumöret up. Rather on the contrary. And in addition, the U.S. dollar continued to weaken against both the euro and the Swedish krona. Which create pressures on many european listed companies vinstkapacitet.

It looks more and more like the stock market is building up for the perfect storm. 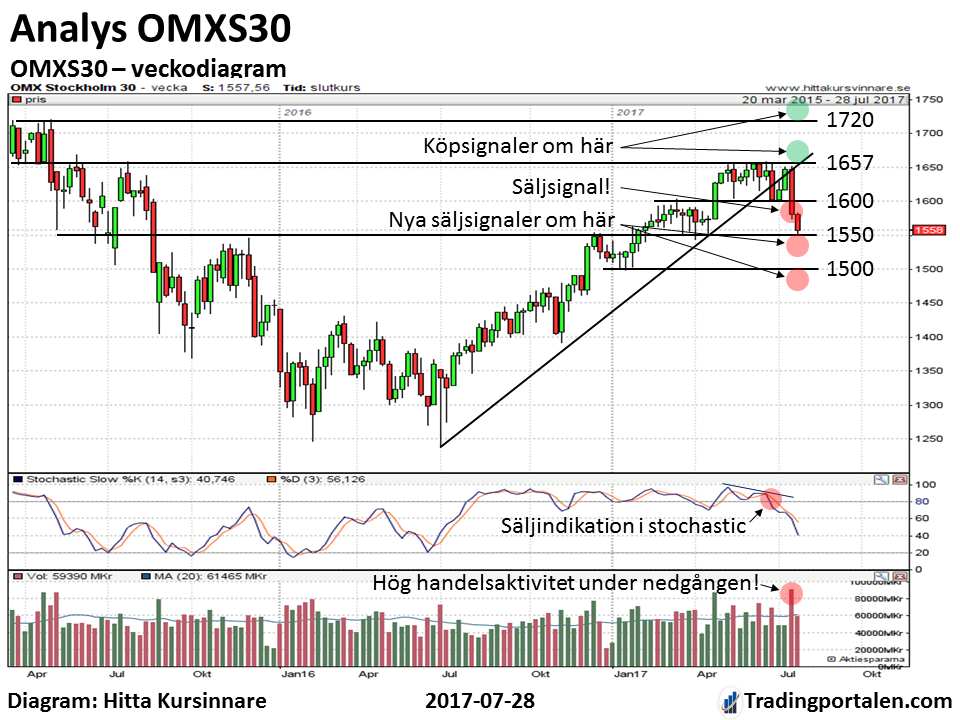 In the weekly chart look we also to the OMXS30 in the middle of July we got a strong sell signal in a relatively high trading activity, the break below the important support at about 1600. Although the upward trend line in the chart has clearly been broken. Important assisted areas are now at about 1540-1550 and about 1500.

In this longer time horizon is obtained a little bit more important buy signals only if the OMXS30 during a relatively high börsaktivitet establishes itself over the resistors at about 1657 and about 1720.

Despite these declines , however, is according to our definition, the slope of the 200-day medeltalskurvan, and it’s really long trend for the OMXS30 still continued upward. The OMXS30 is also maintained in the long-term pattern, with both rising bottoms and rising tops. This pattern is broken only if the index goes below the support area at about 1540-1550.

But with the negative handelsvolymmönstret is a great risk that the OMXS30 sooner or later will seriously challenge even these long-term trendindikationer.

It a little more short-term scenario, however, the OMXS30 come down to a strong support area at about 1540-1550. Also the area of the 200-day medeltalskurvan, which at the time of writing is at 1559, is an important support area.

Moreover, the stochastic indicator is down at the low and oversold levels. This is not a reliable buy signal in itself, then the OMXS30 index can remain oversold for a longer time if it had come out in a strong trend. But you can much easier get to make upward recoils in the downward trend. In particular, if the index now is down to strong support levels.

So from the support area at about 1540-1550 , we should at least get a good bounce up on the OMXS30 index. Anything else would be almost remarkably low of the index. Which in this case, in a slightly worrying way would begin to confirm the scenario of the perfect storm.

In the day chart we can also see that the OMXS30 index has the next a little clearer resistance levels at about 1580-1585, and about 1600. Upward recoils up to these areas during a relatively low trading activity would not be particularly surprising.

Would, however, OMXS30 in a relatively high trading activity, preferably with börsomsättningar during uppgångsdagarna of at least 22 to 25 billion per day, to establish itself above the resistance at about 1600 obtained very interesting buy signals.

In particular, if the OMXS30 later in a similar way also establish itself above the resistance at about 1657. In such case the börsscenariot significantly more positive. But before something similar happens, unfortunately, it looks pretty dangerous out on the stock exchange. 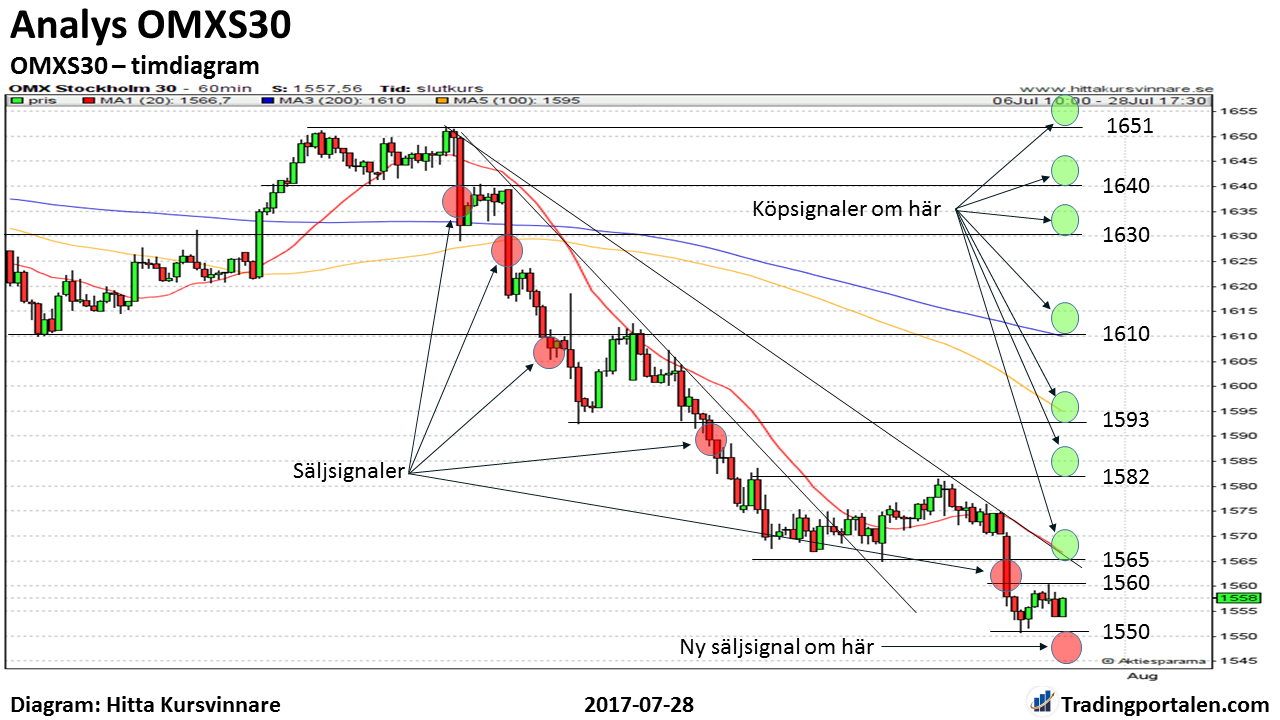 New short-term sell signals are obtained if the OMXS30 index goes below the support at around 1550. But since then, therefore the index is quite strong support levels already at about 1540-1544.

Short-term-oriented actors can therefore, with advantage, monitor the support at about 1550 and the resistors at about 1560-1565.

Buy one at a possible buy signal over 1560-1565, you can then aim at the rise to the first and foremost resistance at about 1582. And then to about 1593, about 1600 and about 1610. However act more carefully than otherwise. For the risk is great that the long trend is turning down and that the stock market can suddenly become considerably more volatile. Stop loss, preferably just below the next horizontal support level.

Obtained säljsignalen below support at about 1550 you can, if you have the time, aim for a decline to the intensities at around 1540-1544. Is broken also these is the next strong support area at about 1500. Stop loss at the positions for the fall, preferably just above the next horizontal resistance level. Alternatively, just one day poof’s highest level.

Long-term oriented investors , we pay attention that according to the technical analysis, the past month the level of risk on the stock market increased significantly. You can argue that the really long trend is still upward. But handelsvolymsambanden become clearly negative. And the OMXS30 has a strong sell signals when under relatively high trading activity moved below the important support at about 1600. Seasonally speaking, it is usually also in the next few months to be weak for the stock market.

So if you want to be careful so they sell of all or part of their long-term holdings. Are you willing to take a bit more risk, you can try to wait for the temporary börsuppgångar before it sells.

This recommendation applies until clear buy signals obtained in the OMXS30 index. For example, it would be if the OMXS30 during high trading activity establishes itself over the resistors at about 1600 or about 1657. But before something similar happens see it clearly risky on the stock market.