The OMXS30 is the long-term seen in an upward trend. But in the short term seen in a kraftsamlande phase of consolidation. Seasonally, however, will the stock market now in a strong phase. Which means that the opportunities look good for the OMXS30 going to break out upwards and start a normal sommarrally. Buy signals are obtained on the OMXS30 during an increasing trading activity to establish itself above the resistance at about 1657. In this case, we aim at a test of the resistance at the OMXS30 old, peaking in 1720. Sell signals are obtained, however, if the index unexpectedly breaks below the support at about 1600.

The stockholm stock exchange moved himself slightly upwards in the last, of the springs shortened, trading week. Our Swedish storbolagsindex OMXS30 index went up 0.6 percent and ended at 1645,36. This year is thus the development of +8.5%. And +11.8% including the secluded dividends.

The week was relatively nyhetsfattig and most of the OMXS30 shares was also irregular. But among these withdrew, however, Alfa Laval, Astra Zeneca, Atlas Copco, Electrolux and Volvo something up. While Getinge and in particular the banks, instead, fell back.

Long-term speaking, is the OMXS30 remain in their strong upward trend. In the weekly chart below, you can see the long-term pattern of rising both tops and bottoms. 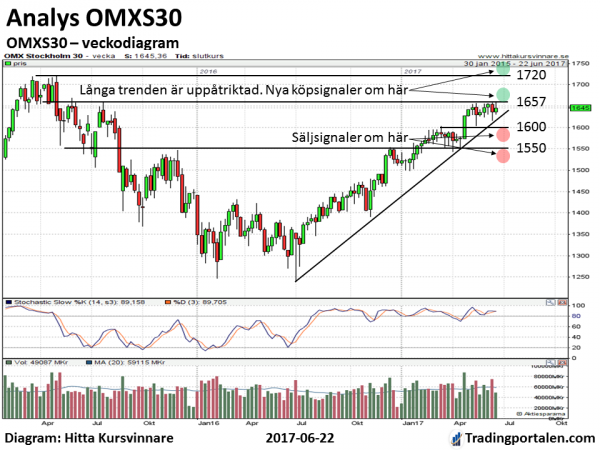 However, now finds itself OMXS30 more short-term seen since mid-may in a consolidation phase and is gearing up for an outbreak. Key support levels are where at about 1600 and resistance at about 1657.

The OMXS30 get a strong buy signal on the index in an increasing trading activity can establish itself above the resistance at about 1657. In this case, we aim for a rise to, first and foremost the resistance level at about 1720.

Last week, the OMXS30 an attempt to outbreak up. The maximum was then OMXS30 intraday up on the 1658,9. But was unfortunately not close over 1657. Instead turned the index down to its lowest 1631,3.

Last week was also the end of a seasonally weak period, which usually ends by midsummer. Then usually the stock market begin a rise which usually reaches its peak at the end of July or in August. We will see now if this was avstampen of the usual sommarrallyt. For it is not true all year. But quite often.

The second sign of strength is to the stock exchange, so long as in all cases, resisted the warning signs of deterioration in the US economy as the weak US dollar and falling long-term interest rates sent.

If the stock market now is going to turn up, therefore, it shall be interesting to see if raw materials, long-term interest rates and the U.S. dollar also turns up. In this case, learn the stock market upturn led by cyclical companies, as industrial and resource companies, and probably also by the banks. Otherwise learn an upturn as soon as led by the pharmaceutical, real estate, technology and gaming companies.

Would, however, OMXS30, contrary to expectation, during the relatively large trade to establish itself in the support at approximately 1600 obtained a strong sell signal. In this case, we aim for a decline to the first important support area at about 1540-1550. 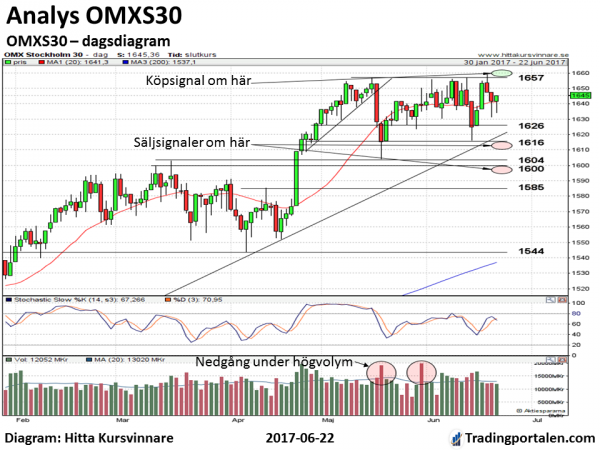 In the day chart above , we see that there above the 1600 also provides interesting support levels at about 1626, and about 1616. The long upward trend line is also soon at the support, at about 1626. Another interesting support level to monitor is the rising 200-day medeltalskurvan that at the time of writing is approximately 1537,1. It rises, however, steep and will soon connect to the intensities at about 1540-1550.

The Stochastic indicator continues to stay in a neutral area. And therefore still no clues about the direction in which an outbreak should come.

But as we in the previous analysis emphasized, so is most likely that an outbreak is in the long trend direction. That is to say, upwards. In addition, the now säsongsmönstret with us. So statistically speaking, the possibilities are good for the OMXS30 the next few weeks to get new buy signals by an outbreak of resistance at about 1657.

The important thing then becomes to observe if this will happen in a rising stock market trading. For any buy signals will be something to rely on should börsomsättningen during uppgångsdagarna be clearly higher than it has been during the past nedgångsdagarna. Otherwise you increase the risk that the recovery will be fairly modest. Or even to köpsignalen was false. 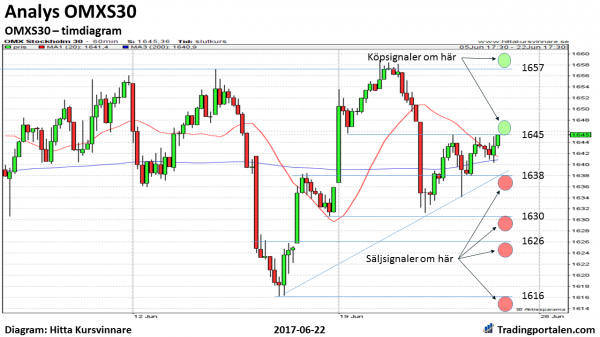 More long-term oriented investors as long as the intensities are at about 1600 keep aim on the new gains during the summer. However, the risk level has been increased in the last month when the index had a number of nedgångsdagar under relatively high trading activity. And then both the US dollar and long term rates have gone down, signaling a worsening of economic prospects. Would the OMXS30 during a relatively large trade to establish itself above the resistance at about 1657, however, takes this signal out these warning signs.

Years ending on -7 , however, have an unpleasant habit to offer sudden and fairly sharp fall in their second half of the year. Type the stock market had the years 1987, 1997 and 2007. We may hope that this unpleasant pattern is broken this year.

Overall, is it a need, however, for the försiktige investor is so small to begin to take the safe before the unsafe. He may, therefore, want to sell parts of their share – and indexinnehav at the gains. Especially if these take place in a relatively low trading activity.