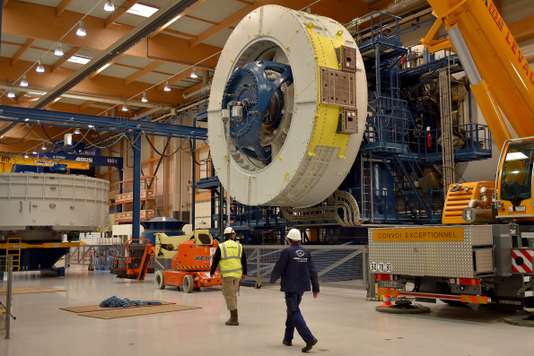 On the quay of the port, the monsters of 400 tonnes and 10 metres high, similar to the armored vehicles of The Empire the counter-attack. Three nacelles giant – the upper part of a wind turbine – which will be fixed blades, wisely waiting for the face plant General Electric of Montoir-de-Bretagne (Loire-Atlantic), to be delicately laid on ships to be transported in the North sea.

In the factory, more than 120 employees and hundreds of temporary workers are toiling to finish the last nacelles of offshore wind turbines to be delivered in Germany for the park Merkur, one of the largest in the country, with 66 wind turbines. What to provide electricity to the equivalent of 500,000 homes.

But the factory brand new, built by Alstom in 2014, recovery from by GE, faces a paradox. While investments in offshore wind have increased by 40 % in two years in Europe, as prices are in a free fall and the competition between the industry giants is raging, the site of Montoir will have to operate at idle because of the delay taken by the French industry.

Use of opponents, and bureaucratic delays

In the gigantic hangar, the generator is assembled and tested before being mounted on the platform, with its platform red, which will ask the helicopter for maintenance operations. “You put a twenty days, to produce a generator,” explains Jean-Baptiste Vilcoq, the production manager, who stresses that the plant has been using a series of local sub-contractors for its equipment and its machinery. The coupling between the generator, the nacelle and the nose of the wind turbine is a technical challenge, and is the tenth of a millimetre. “These are very large assemblies, which require a lot of precision,” said paul Vilcoq.

Originally, in 2011, Alstom was committed alongside EDF on three wind farms in Britain…