The confidence of the bosses is always sunny, even if a slight haze appears over the sunny optimism that followed the election of Emmanuel Macron to the presidency of the Republic. According to the barometer of the Observatory of SMES-ETI conducted by Opinionway for the Banque Palatine and Challenges, the confidence in the French economy in six months is 78%, which is 6 percentage points less than in September and 7 fewer than in June. Remember that at the end of the quinquennium previous, this indicator was at… 45 %.

On the front of reforms, one concerning the vocational training is quite expected, a majority of business leaders, considering that the current system does not work well. This was not the case in 2012. According to 72 % of the panel the goal is to facilitate the recruitment of candidates with the right skills, that is to say, better matching the supply and demand on the labour market or too much of the trades are still under tension. According to the experts at Opinionway ” a large part of the managers of SMES-ETI consider that the opportunity for employees to directly contact the agencies, without going through the OPCA, would facilitate the management of training in their businesses.” The draft of the “branding” of the training bodies is also approved by 66 % of the panel. 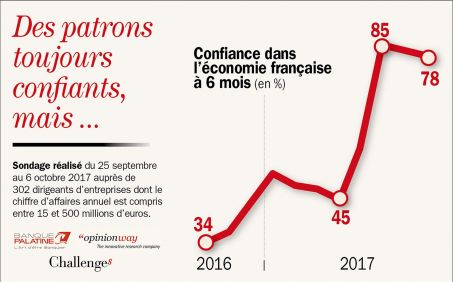 Survey conducted from 25 September to 6 October 2017 with 302 officers of companies whose annual turnover is between 15 and 500 million euros.