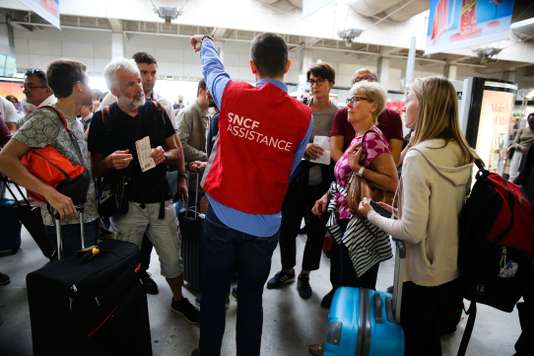 And one more… The train traffic at the gare Saint-Lazare, in Paris, has been discontinued, Tuesday, 26 December, by a new failure. The incident, due to a breach of the power supply, was blocked, in the morning, 3 000 users at a railway station, which welcomes trains towards Normandy, as well as two suburban lines.

It is therefore – at least – the fourth incident that comes to cripple or severely disrupt a large train station in paris since this summer. Each new avatar overwhelms a few more travelers, and increasing media attention, and arousing the wrath on social networks, some users are not missing fun of it, this Tuesday, the” unworthy ” SNCF and the gare Saint-Bazaar “. But what happens, therefore, the national railway company, who has just been through a year of rough ?

Multiplication works on all network

This is what is called the law of series. Two failures giant occurred at the gare Montparnasse, one of which, this summer, in a full weekend of great starts. More than 2 000 passengers in possession of tickets that, the day before Christmas eve, fail to take their train, crowded as ever in the station of Bercy and Austerlitz. If you add to this, incidents a little more minor, like a breaking of a catenary, station of the North in September (which reminds one, major, to December 2016), or the failure blocking more than 200 trains gare Saint-Lazare – already – in November, the last misadventure loop a quasi-grand slam paris stations are paralysed, which could not have escaped the station.

And again, the spotlight media is focused on the problems affecting the capital. The users have also known many misadventures in the region, as this issue of sustainable signaling, which blocked the traffic of the regional trains between Miramas (Bouches-du-Rhone), Marseille, and Avignon, at the beginning of December, or the recent failures of the referral to the Orleans, and between Lyon and Chambéry.