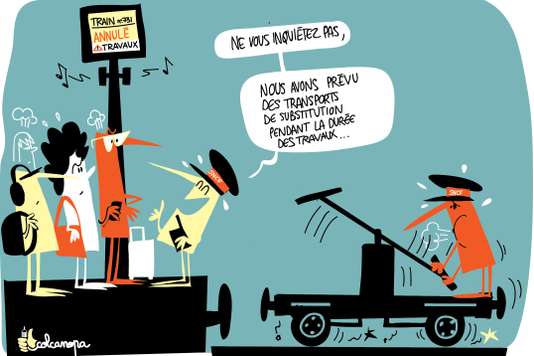 The new great crash that has completely paralyzed the railway traffic to the Great West for eighteen hours to the gare Montparnasse, Paris, on Sunday, December 3, raises a number of questions. Four months ago, this summer, a previous incident had already blocked the same railway station in a full weekend of great starts.

And this could, in effect, rocking to the station, as this new incident has enraged the thousands of travelers stranded or delayed, and caused the ire of several members of the government, starting with Elizabeth Terminal, the minister in charge of transport. This last has summoned Patrick Jeantet, the president and CEO of the SNCF Network (an entity of SNCF in charge of the management of the railways), just the situation has been restored, Monday in the morning. During the interview, the minister has called on Mr. Jeantet is to present “from here to the end of the week” a ” new organisation and a new management of the management of the great work “.

A few cries of indignation ministerial accompanied the admonitions of the minister. Bruno Le Maire, minister of the economy, has tapped him as one’s fist on the table : “The SNCF must explain to us what happened, it needs to be accountable to the government and especially to the French to make sure it doesn’t happen again. “As for the government spokesman, Benjamin Griveaux, he deemed this same Monday, “unacceptable” for travellers, the failure of a giant Montparnasse.

Beyond these manifestations of wrath in the government, how can we explain this series of malfunctions ? What are the causes and what could be the consequences for the station, its management, its organization and its clients ?

The failure of the December 3, is comparable to that of the summer ?

Caused by a computer bug that is reported on a position switch, at the end of work on this post during the weekend in order to modernize the city, the breakdown is a…