“Banks will increasingly face the telephone operators in France but also in Europe and in Africa,” said last week the boss of Société Générale, Frédéric Oudéa. A few weeks of launch (rescheduled from July 6 at the back) Orange Bank, another operator prepares its competitor SFR and its parent company Altice which he will take the name. All the small world of telecoms and that of the bank had noticed that the group of Patrick Drahi was filed last October with the european office for intellectual property (INPI) the trade mark at the european level Altice Bank, by the company Next Luxembourg, the holding company of the galaxy Altice. The brand has just been officially registered. His rival Free also had filed the French brand FreeBank, several years ago.

The group converge with media and telecom is seriously considering a new occupation since he has filed an application for approval from the european central Bank (ECB), according to le Parisien. Altice confirms nor denies. The european institution could give its opinion on the application for a banking licence before the end of summer vacation ” according to the newspaper. Last October, we are quoting a well-informed source who said that ” SFR is in the process of fussing over the issue. Patrick Drahi would have expressed his displeasure to Michel Combes on the lack of initiative in this area. “ 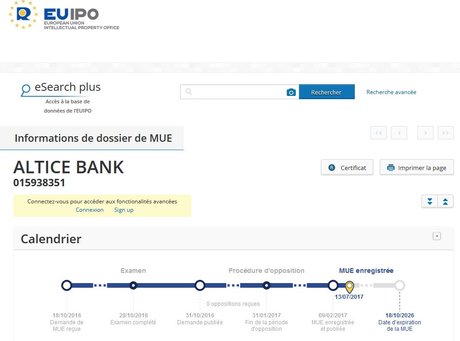 [The application was filed on 18 October with the european office of intellectual property and the trademark was registered on 13 July.]

The operator would seek for several months, “an innovative partner” and would, for this, made contact with several startups of the Fintech. But several have been bought by banks, in the image of the German Fidor by the BPCE group (Banques Populaires Caisses d’epargne), Nickel by BNP Paribas, of Morning by the Bank Edel distributor Leclerc.

The launch of Altice Bank would be considered between the end of 2018 and spring 2019. Enough to leave Orange Bank down the road.

The telecoms operator Patrick Drahi has already made several forays into the payment, with more or less success. In 2012, his bank card, prepaid SFR PayCard, which is proposed with Mastercard, and the German Wirecard, had been a flop and arrested two years later. On the other hand, overseas, a card similar, signed Visa, another company of the group Altice, OPS, which has the status of a payment institution, which works quite well. The operator also offers its solution SFR Pay, which allows you to adjust some of the services on its mobile billing directly from your smartphone, for example, the purchase of videos on Dailymotion, subscribe to Meetic, or the parking lot at Marseille. there are two years of age, SFR had set up its business unit ” m-payment, m-banking and smart services “, which the director reports on his professional profile that its mission is, among others, in the” elaboration of a strategy of diversification in the banking sector (Mobile banking) “.

For a telecom operator, mobile banking holds the promise of generating additional income (credit conso, for example) per subscriber each month based in large part on existing infrastructure, including its network of stores. However, the Orange itself has acknowledged that it had underestimated the character very restrictive banking regulation.