A clearly intense agenda has emerged since the previous råvarubrev. Supertorsdagen the previous week has been put in focus, where we had an unexpected development in the british parliamentary elections, which left its imprint on the foreign exchange market. The oil market has continued to experience negative progressions and noted around the year low levels. Minimum bid rate of the ECB, went relatively unnoticed. The question is whether this week’s large focus, which lands on the us interest rate announcement tomorrow Wednesday, means the same development. The market expects a rate hike, but the question is rather whether hawkish or dovish statements will be, and if any movement has already been presented in the u.s. dollar…

After a short break due to national day in the previous week, is råvarubrevet finally back.

It has been an intense time since the previous råvarubrevet, with everything from continued disappointments after the previous OPEC meeting in Vienna, the british parliamentary elections, the hearing of former FBI head James Comey, and last but not least, the interest rate announcement from the european central bank.

For the moment, the market is slightly cautious ahead of the large minimum bid rate tomorrow Wednesday from the u.s. central bank.

The expectation is a rate hike by 25 basis points to a range in the 1.00-1.25%, and with a strong development, where the dollar continued to strengthen ahead of minimum bid rate, perhaps we already received a discounted future movement in the foreign exchange market…

Brent semester had previously received a trigger to re-admission under 50 dollars, on concerns over the agreement that is in OPEC, Qatar in focus, when it emerged that saudi Arabia, Egypt, Bahrain and the United arab Emirates cut diplomatic ties with Qatar.

The oil, however, found weak positive momentum early in the week, after both Russia and saudi Arabia assured the investors that their production is holding back supply.

Opec has left its forecast on Tuesday for the global demand unchanged, while the forecast for supply outside OPEC is lowered slightly. According to secondary sources increased production in OPEC output in may, with 336.000 barrels per day, to 32.14 million barrels per day.

”The oil market has been on the decline since the Opec announcement last month, and now when the u.s. stock increases, it is possible that the decline progresses,” said David Madden at CMC Markets to the Telegraph earlier in the week.

We have previously noted that Libya and Nigeria have been potential risk, and very really was the most increased oil production in countries like Libya, Nigeria and Iraq, while output in Angola and the United arab Emirates showed the greatest reductions.

Among the base metals is that right now something positive tongång in both copper and nickel, while aluminum and zinc, rather, looks to be in a negative momentum.

As we previously reported was in 2016 a very good year for mining companies, with nice gains in other base metals, and an interesting observation is that in the latest annual report from PwC, it was reported that the world’s 40 largest mining company went from reporting a loss of 28 billion dollars in 2015, noting a profit of 20 billion u.s. dollars in 2016.

The ECB left unchanged interest rate announcement and QE-programmes in the previous week, and passed relatively unnoticed in the market. The euro strengthened, however, initially in the week, when it emerged that Emmanuel Macron looks to be able to get strong parlamentsstöd for their policies. His party MREL, won a convincing victory in the first round, and can have a historically large majority, if this result is confirmed in the second round next Sunday.

Worse, it has been for the british pound, which fell already in the last Friday. A surprising result of the british elections was a wet blanket, where the prime minister Theresa Mays hopes to expand the majority were washed away.

”What will affect the pound in the near future is the strength of the new government, which is to go to Brussels to negotiate brexitvillkoren for the Uk, and since every possible coalition appears to be weak, so too will the pound to be weak,” commented Danske Bank.

Supertorsdagen passed thus better than expected. We also had a relief on the stock market, as risk appetite increased after James Comey’s prescribed report not released any unexpected information, which marked the beginning of the strengthening of the dollar in Friday.

Among foods, we think that the cocoa stand out this week, which is possibly can have attained a turning point, after a period of decline…

The previous recovery that occurred after admission under 50 dollars in may, is now completely washed away. Positive attitude has made a u-turn, and Brent semester noted now in addition to around the lowest levels in the 49 dollars, which noted the significant volume last year.

Just 49 dollars to be defined as a clear technical key level, and acting for the moment as the clear resistance level when Brent semester now stomps slightly less.

Despite the fact that köpstyrka looked forward these last three days, we do not find any clear momentum to the outbreak of the north, which means that we are somewhat cautious. We are looking for an establishment across the resistor at 49 dollars, otherwise is the risk that in the longer term we rather will bring a decline towards the next support level at 45 dollars.

Oil also traded clearly below the MA 200 which is pointing slightly to the south, which hardly strengthens a potential outbreak to the north, but rather helps with the negativity. 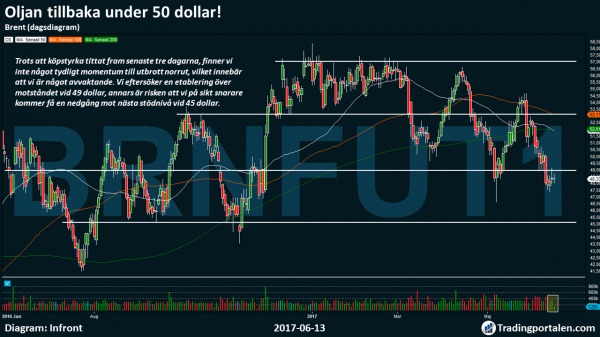 Copper is a base metal that really found the positive momentum of the last few trading sessions, and have risen more than 3 percent in a week.

Technically challenged the resistance level just under 5 850. This price level we expect heavy resistance from the sellers when we find a significant volume a year ago, back here. However, we have an underlying positive momentum, and when we challenge this resistance level seriously, we challenge at the same time 100 day moving average which we believe to be positive.

Clearly higher bottoms since the low for the year earlier in may, contributing with additional positivity, and indicates that we may be about to break to the north, and then challenge the next resistance level at the 5 950. That MA 200 points clearly to the north, and that we noted clearly contributes a further positive underlying belief.

However, the dollar is a risk factor, and we await and see how it may emerge after the minimum bid rate tomorrow, Wednesday, to await a confirmation, and escape a fake eruption to the north. 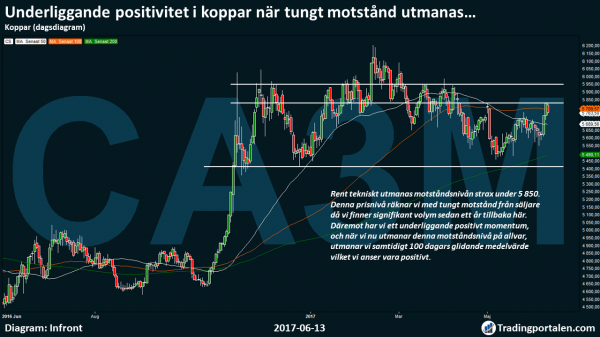 Gold challenge heavy intensity and average before the us interest rate announcement.

In the previous råvarubrev we set our gaze to 1 300 dollars. We did not really go the whole way, but turned at the 1296.50, before we fell back to challenge the heavy intensity.

The negative turning point came, when the risk appetite increased after the previous week’s hearing of the former FBI director, James Comey. The decline means that we are now not only challenging the support level at 1260 dollars, but also the 50 day moving average.

However, we see a slightly decreasing strength from the sellers, in connection with that we are all closer to get these ratios.

In the short term, we are cautious as we await Wednesday’s interest rate announcement from the Fed. Especially are seeking a more duvaktigt statement, in order to give weakness to the dollar, and support to the increasing interest towards the gold.

We have also previously noted that the stock market is trading at high levels, and as late as on Tuesday noticed the Dow Jones to new record levels, which continue to raise a relevant issue. How much more have we to give? And when we begin to see the investors to really run to the safety net of gold…? 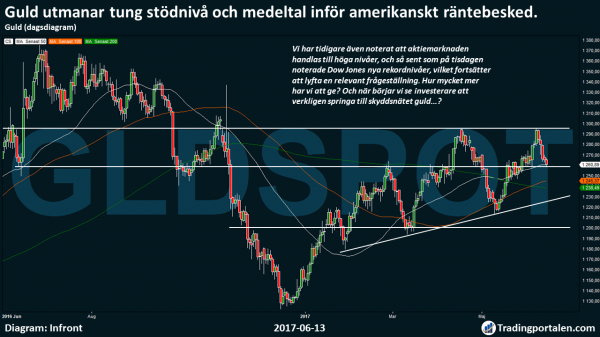 Mobilization before the outbreak of USDSEK…?

Despite the fact that we earlier in the week råvarubrev recurring highlighted that we possibly can have got a calculated motion to a rate hike tomorrow Wednesday from the Fed, so it is not possible to depart to the u.s. dollar against the Swedish krona looks interesting out in the short term.

In the short term we have a focus after the low for the year at 8.60 dollars, and not least, this year’s decline meant that it has become less interesting to trade us shares, unless the setup:a has been extremely pleasant. Not least, counteracted a possible rise in the u.s. share, while the Swedish krona falls against the dollar on a daily basis. In addition to this, one shall not forget the currency exchange which takes place when trading abroad, which very often is in the investor’s favor…

The political turmoil prevailing in the united states with Trump, as we continue to highlight the periodic times, is worth to include in a possible short-term trade in USDSEK.

Even if today we do not expect any hökaktigt statement in connection with the minimum bid rate, we choose nevertheless to highlight the currency pair. The smallest hökaktigt statement tomorrow, we see the opportunities to a really nice movement to the north. However, we do not see the same effect on the movement if anything more duvaktigt announcement comes tomorrow, then we will not find ourselves in such a technical situation. 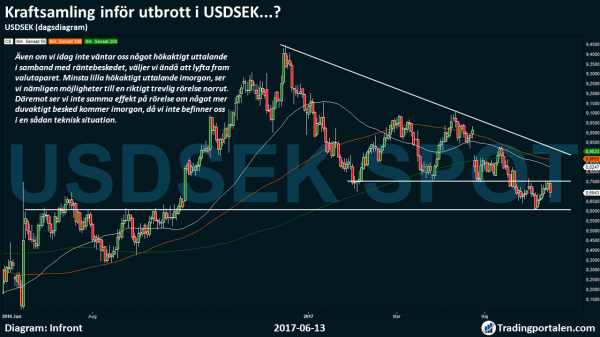 Cocoa is gearing up for the rise in femårslägsta?

After a long period of decline, see cocoa out to find the land at femårslägsta.

We had previously received a turning point in the beginning of may, around 1800, that was the start to a renewed positive sentiment, which has taken us back above the 2000 level.

We had such a clear focus on this sentimental heltalsnivån, and at five-year low bodes well for a possible turning point.

In the short term, we can possibly get a smaller decline in conjunction with that we get a rate hike. However, we believe that the political turmoil that is going on in the united states will get the new starting point to a weaker dollar, and provide support to the rise, also for cocoa.

In 2059, we have also begun to build up a technical resistance level, with clear interest from both buyers and sellers. Shortly thereafter, we have also MA 40 weeks, whose establishment above may well give a really nice rise on the basis of a more long-term perspective. 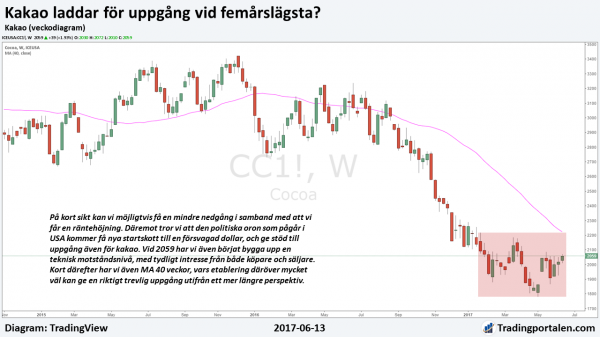