Continued positive progressions got storbolagsindexet OMXS30 stepping further to the north on Thursday. The OMXS30 rose +0.69% to 1596.31, while turnover on the stockholm stock exchange was sek 13.7 billion. Profit taking came into focus in the united states, which closed at the minus on Thursday night, and equally so traded Asia to the minus after the night’s trading. Sentiment is expected to continue this at home, where the OMXS30 now is short-sighted heavily overbought…

The OMXS30 managed to maintain köpstyrka on Thursday, and although it was not significantly greater when the turnover on the stockholm stock exchange showed a smaller increase, so it is still a positive indication.

It now looks like that after two weeks of trading, get a second week in a row with köpstyrka that dominates. We left on Thursday now clearly over yet the MA 200, both the MA of 40 weeks.

Storbolagsindexet is now in the short term heavily overbought, which means that we expect at least initially to profit taking. 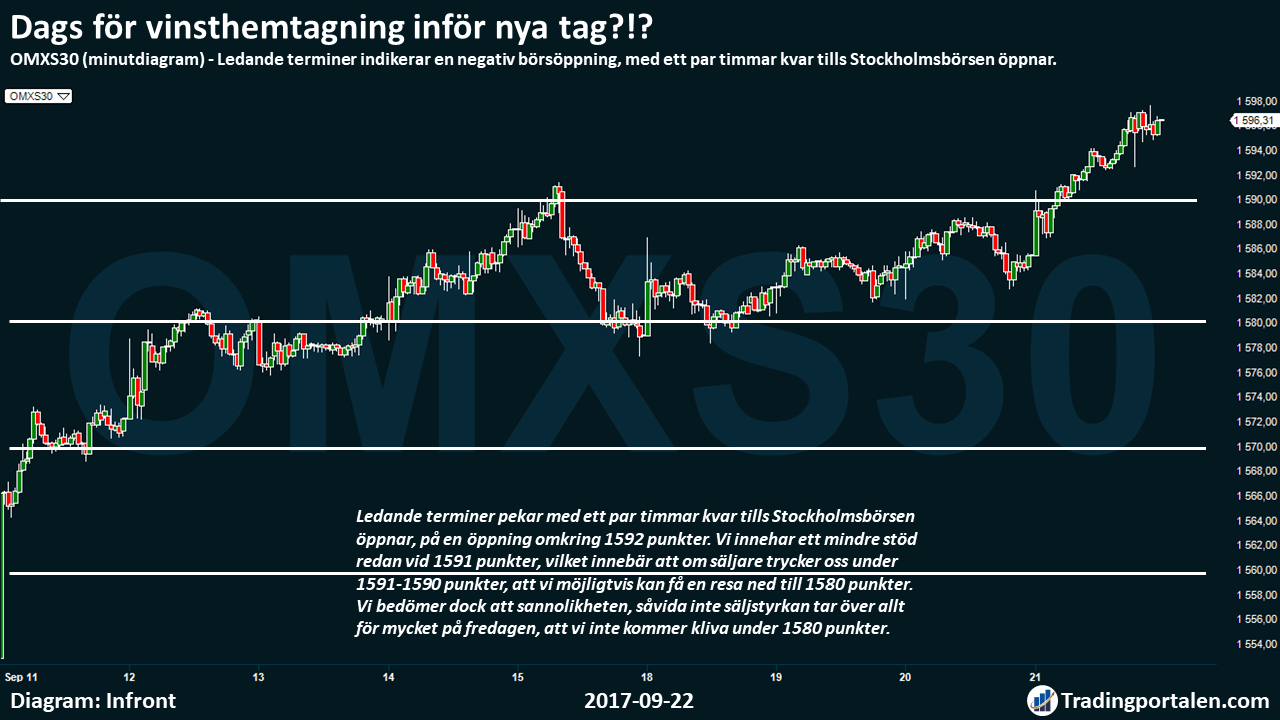 Leading futures pointing to a couple of hours left until the stockholm stock exchange opens, at an opening around 1592 points. We hold a less aid is already at 1591 points, which means that if sellers push us over the 1591-1590 points, that we can possibly get a trip down to 1580 points.

We believe, however, that the likelihood, unless the sales force takes over too much on Friday, that we will not step in 1580 points.

At 1580 points are just below the long-term partner in the form of the 200 day moving average.

In addition, reported on Thursday bank sign of strength, as we had hoped for on Thursday, and maybe it will be a common sign of strength to come from indextunga bank and the workshop, which can get us to challenge and step over 1600 points the next week?

However, it is still several question marks that remain. We still have a clearly negative ‘ vapour, at the same time as north Korea is not completely played out. 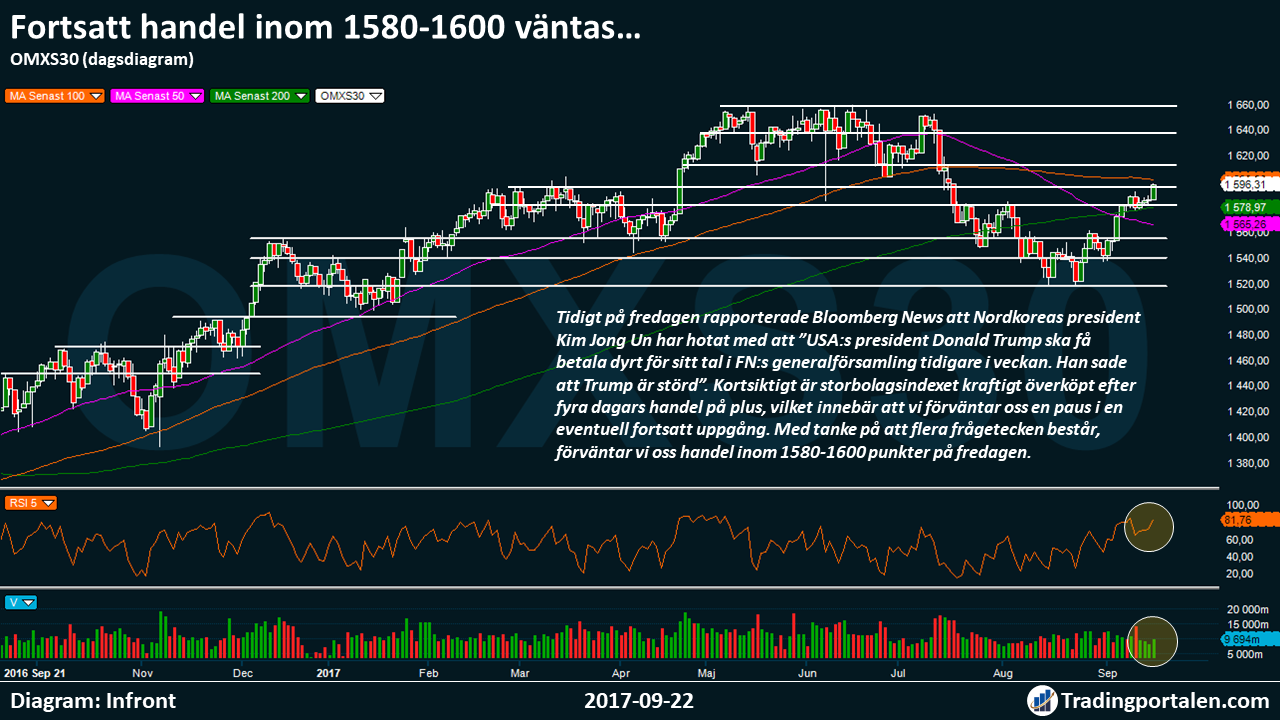 Early on Friday, reported Bloomberg News that the north Korean president Kim Jong Un has threatened to ”president of the united states Donald Trump should have to pay dearly for his speech in the UN general assembly earlier in the week. He said that Trump is disturbed”.

The short-term storbolagsindexet heavily overbought after four days of trading on plus, which means that we expect a pause in any further increase. Given that several question marks are composed, we expect trading in the 1580-1600 points on Friday.

If sellers take over too much, which we do not expect for the moment, to challenge the 1580 points, then actually increases the risk that we may challenge the 1560 points initially next week.

Us senior semester, the S&P 500 points as well at a negative introduction, when the semester has fallen -0.25 percent after the night’s trading in Asia. The u.s. dollar has also fallen down to 7.97 this morning, which dampens the mood a bit.

No major corporate events are the focus. Castellum traded ex-dividend on Friday. In particular, the focus is on when Theresa May speaks about Brexit in Florence, which is expected to clarify a bit more how the road will look like in the future. On makroagendan we get in the other this Friday combined preliminary PMI for september both for the EMU and the united states.

Yesterday’s main börshändelser.
Fingerprint on the way to $ 20?!?

Fingerprint Cards continued further to the south on Thursday, which means that the company’s shares a week ago now lost over -30%.

The decline since year-end amounts to -65%, and now looks to be on the path to a challenging of the sentimental heltalsnivån 20 sek.

In addition, we do not find any major support until around 17.50 kronor, 2014 year high, which suggests that the challenging of sek 20 can provide a breakthrough.

The current week was triggered the sharp inledningsvisa decline as a result of a press release where the Fingerprint trail to revenues in the third quarter will be in the range of 800-840 million.

In a compilation from the SME Directly, was previously expected that third quarter revenues would amount to 1.507 million.

The previous week was also Apple’s launch of a new flaggprodukt iPhone X that do not conform fingeravtrycksläsning, for the benefit of the face detection, which created an initially negative sentiment among investors.

The majority of riktkurser has recently been adjusted, including the Carnegie of sek 16 per share, UBS 21 sek, SEB 24:50, Handelsbanken on 24 kr, and Redeye on 27 ce, Redeye highlighted a pessimistic scenario, in which a ”fair value” instead lands on the 10 sek. 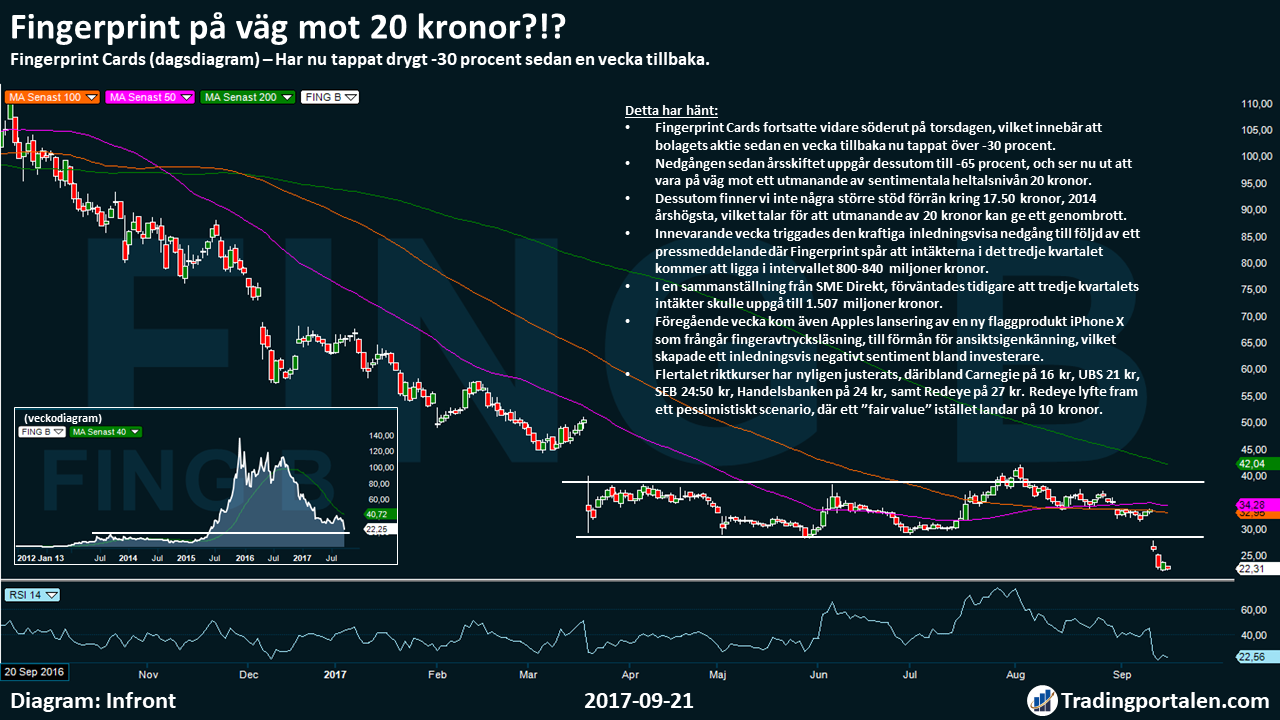 Continued weakness in Ericsson after säljrekommendation.

The Risk of the share issue and potential big bot from u.s. authorities, according to Carnegie.

Sellers continue to dominate in Ericsson, and has since three months back lost over -29% of market value.

The steady decline has meant that we are now trading around 44 crowns, just above the ettårslägsta at 43.50 dollars.

Just 43:50 sek, is also a technical support level after which a breakthrough to indicate that we will not only challenge the $ 40, but also that we can get a decline against the 15-year low around $ 35.

Thursday’s negative fuel occurred in connection with the Carnegie, the council reduced the to sell from the previous keep. Riktkursen to be adjusted downwards even 26 per cent from 53 to 39 dollars.

”We also see a number of risks in the share, including a possible share issue and a potential big bot from the us authorities, as well as significant downgrades in the consensus,” wrote Carnegie. 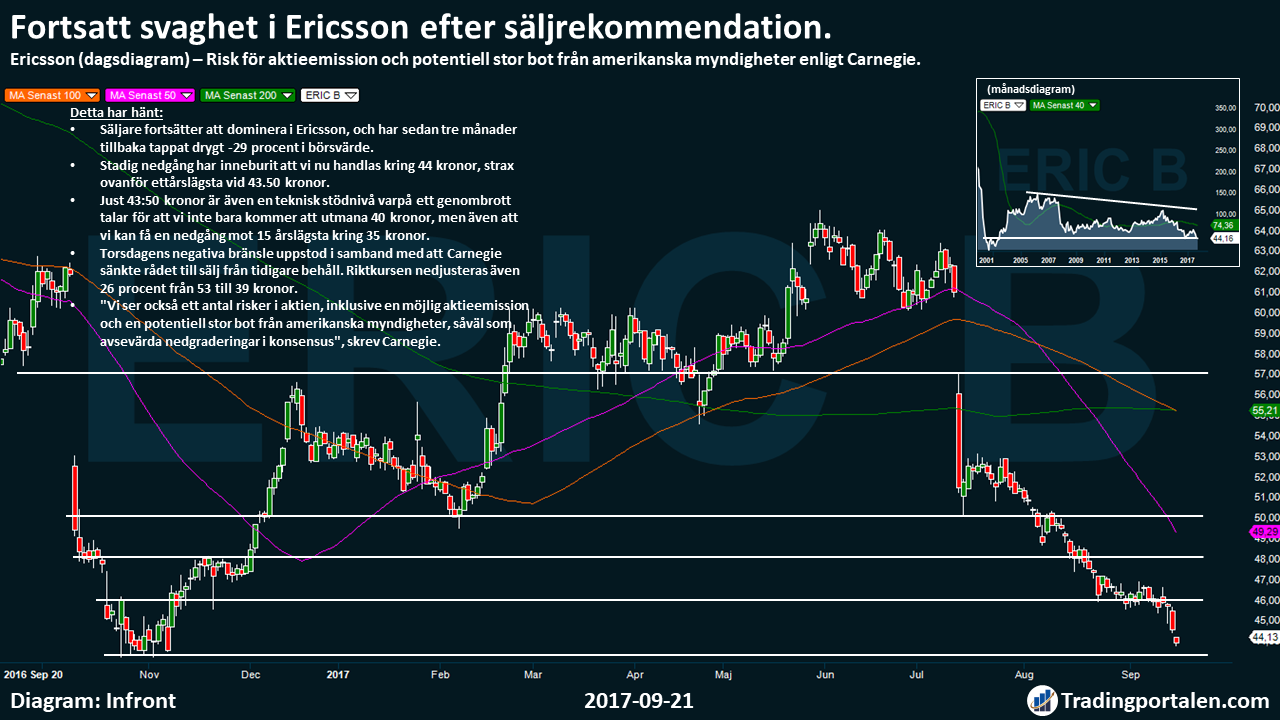 The Bank keep up the vibes on Thursday.

The untouched key interest rate from the Fed, but will initiate a reduction of the balance sheet in October, which gave fuel to the dollar and interest rate markets.

Wide the rebound after Wednesday’s interest rate announcement from the Fed. U.s. dollar lifted initially, and gave an increased risk appetite within the banking sector, which has drained to the european trade.

In the short term challenged most of the resistance levels, and speak for one positive outbreak, and further strength in the short.

Also the Swedish Nordea rises above the +1% on Thursday, and the challenge now the ceiling in the consolidation that have been going on, on a brief outbreak borträknas at the end of August…

British Barclays also got fuel on Thursday, and is trading relatively close to the year low levels. Theresa May is also expected on Friday to give an update of where the country stands on Brexit negotiations. 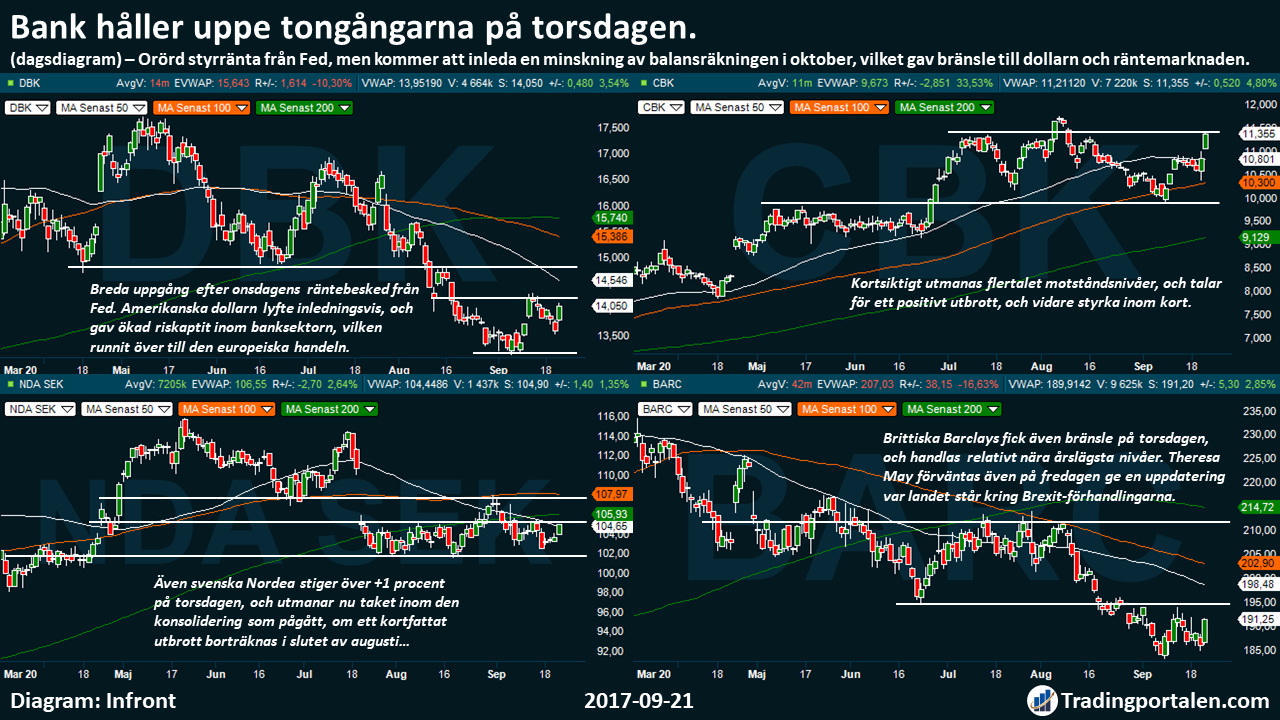 Wednesday night interest rate announcement from the U.S. was followed by rising interest rates and strengthened the dollar, and banks and export-dependent engineering companies acted accordingly, the powerhouse on Thursday’s stockholm exchange.

The OMXS30 closed 0.7 per cent up on the level 1.596, with shares of 13.7 billion kronor, traded on the stockholm stock exchange. With the upturn, the stockholm exchange has risen all of the week’s trading days so far.

Wednesday’s interest rate announcement meant, as expected, no revision level on the us federal funds rate, but marknadsreaktionerna – the strengthening of the dollar and higher market interest rates – indicated that the news was interpreted hökaktigt. Among other things, it was announced that the Federal Reserve will stop buying bonds in October, and that you are aiming for a rate hike this year.

From the Swedish Riksbank came relatively duvaktiga signals during the Thursday: a räntemötesprotokoll showed that members see the recent increase in inflation which is partly a result of coincidences, and the krona has strengthened faster than forecast in the July – factors, both of which seem to speak against increases in interest rates.

The banking sector was clearly the strongest in Europe, followed by the passenger cars, and in the OMXS30 resigned Nordea with victory by the to rise more than 2 percent. Handelsbanken and SEB rose around 1.5 percent, while Swedbank was developed in line with the index, plus 0.6%.

Volvo went is strongest among verkstadsbolagen, plus 1.9 per cent, and among the winners in the sector were also Alfa Laval, Autoliv, both of the plus 1.4 per cent.

Fingerprint was the OMXS30-jumbo with minus 2.8 per cent and the closing price of the 22:89 sek. Carnegie has lowered its price target to 16 from 22 kroner and reiterated its säljråd. Also Redeye has pulled down their estimates.

Telia was trading around minus 1 per cent for the greater part of the day, but climbed to unchanged after Reutersuppgifter that the company’s fines in the US and the Netherlands can be lower than Telia’s provision of $ 1 billion. Telia themselves announced that the information about the förlikningsvillkor in the media is incomplete, but that an agreement with the involved authorities is imminent. After the closing Bloomberg has reported that the amount of the fine is said to be at least 965 million dollars, a task Telia did not want to comment when Directly asked.

The bolt held a capital markets day in Hallstahammar. According what the ceo said to the News agency Directly was the message of the event to fordonsunderleverantören have good growth ahead thanks to high orders in the recent past. The share closed the, nonetheless, at minus 0.6 per cent.

Getinge’s principal owner Carl Bennet has uppvaktats intensively by competitors and private equity firms that want to buy the company, but he has given suitors of the basket because he considers it to be a better deal to develop the company, according to Dagens Industri. Getinge’s share price rose 1.1 per cent.

Labbtestutvecklaren Senzagen closed at 43:30 sek after its first trading day, more than twice as much as the introductory course in 19:40 sek. In ägarlistan found among other kriminologen Leif GW Persson.

Company Neurovive rose more than 9 per cent after a positive feedback from the european medicines agency (EMA).