This week’s first trading day opened to the south with a clear balancing act at the support level 1640 points. Storbolagsindexet OMXS30 reverted to its previous handelsintervall because we got a closure with -0.97% to 1638.80. The turnover on the stockholm stock exchange amounted to sek 18 billion, which in itself is somewhat alarming, but the face of Tuesday’s trading are the vibes positive. Leading futures suggests that we may be open just over 1640 basis points this Tuesday morning…

Sellers dominated clearly already initially on a Monday, and a clear balancing act was driven with 1640 points then, that acted hard to beat intensity.

We got a not entirely unimportant high turnover and volume during Monday’s decline of almost one percent.

Around in Europe, we noted clear declines, and in the united states stack, particularly the Nasdaq Composite out for the second day in a row, with, again, clear declines in technology companies.

Early this morning, pointing the leading futures at an opening of just over 1640 basis points, which means that this technical key level, despite closing in on the Monday, once again may act as support level.

Us senior semester, the S&P 500 exhibits a weak positive trend this morning, giving additional sign of strength to the opening of the 1640 this Tuesday. 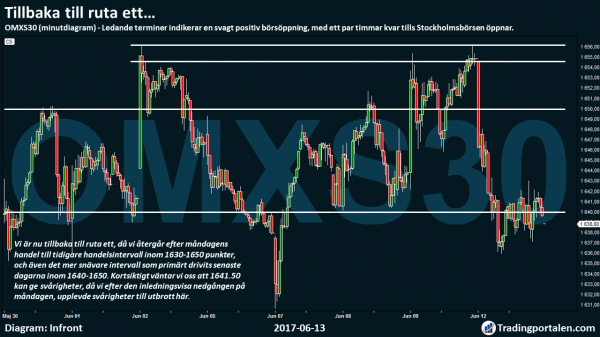 We are now back to square one, then we will return after Monday’s trade to the previous handelsintervall within the 1630-1650 points, and even the more narrower interval that is primarily driven last few days in 1640-1650.

In the short term, we expect to 1641.50 can provide difficulties, then we after the inledningsvisa decline on Monday, the experienced difficulty to the outbreak here.

At the same time, it is not totally unexpected to take a break in the build-up to on the rise. As we noted a clear decline on Monday, does this mean at the same time that we not stepped up to a short term overbought scenario.

We are still seeing sign of strength to rise, and that the 1655 points even that is hard to beat in the current focus, we clearly see in our daily chart below.

Since the beginning of may, we see a clear intervalltak here, which at the same time means that once we step over the high for the year at 1657, we believe that there may be a positive momentum which gives a rise to 1670 points shortly thereafter.

However, it is somewhat alarming that the strength is so significant at the days when we take note of the downs, in the ongoing process of concentration, we assess progress before the outbreak of the north.

This is also one of the reasons that we are more on the ball, then we in the space of a month has noticed a couple of trading days with significant strength and volume. 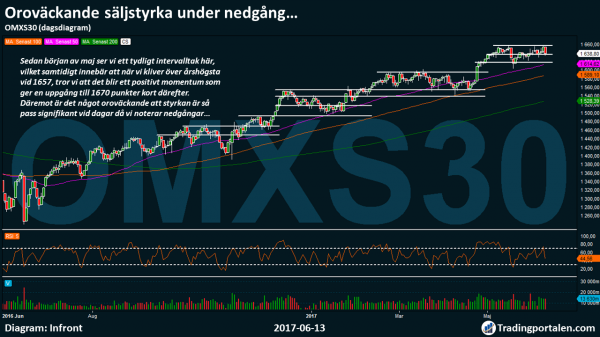 In today’s makroagenda is German sentimentindexet ZEW on the tour. The index shows German investor confidence, which continues to show optimism. No unexpected negative impact is expected, which also means that we likely will get a trade in 1640-1650 then German ledarhunden DAX are not expected to have a negative motion, if the arguments that indicated this morning remains.

Before today’s trading, we have technical resistance levels that await already at 1650, 1654, and the high for the year 1657 points. Then we hold a more significant resistance at 1670 points. Technical support levels await at 1640 and 1630 points, followed by heavy sentimental heltalsnivån 1600 points.

Temporary profit taking or are we on our way further south to challenge the 60 crowns?!?

Ericsson continues to the south with just over one per cent on Monday, and the challenge now 62.50 sek seriously.

The price level in the past year, noted the relatively clear interest from buyers and sellers, not only we had difficulties to outbreaks for a couple of weeks ago, but even October 2016, experienced difficulties.

This means that we estimate that the price level will act clearly aid, and to temporary profit-taking reaches an end here.

Renewed köpstyrkan who came in may, arose in connection with Cevian Capital walked into the company, which now owns over 5% of the shares in Ericsson.
Sauce ent that the end of the previous week was also initiated by the Citi coverage of the company, with the recommendation buy and target price of sek 75. 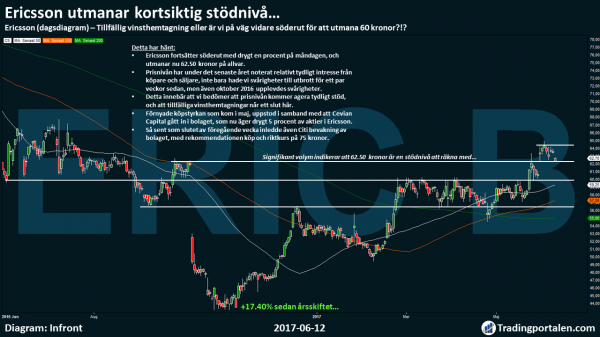 Ahlsell well on the road to high…

DI think the share has more to gain, and stands for the fuel to Monday’s rise of +1.5%.

It may further strength to rise on Monday, after Dagens Industri in its måndagsutgåva highlights the share that year.

The newspaper says that the company has ”a high Swedish market share, Norwegian and Finnish market potential and strong cash flow”.

The company’s shares rose +1.5% initially, to over technical nyckelnivån at 59 sek, which proved to be hard to beat earlier in the year.

Monday’s rise at the same time means we leave the level of aid, and kanalbotten in the handelsintervall which has been underway since earlier in the year at 56.50 crowns, to now open up for a rise to 61 kronor.

In the short term will the shares become overbought in such a scenario, but an establishment of 61 crowns open at the same time up to a new high for the year and a new all time high in the future…

Even the Deutsche Bank has in the past raised the recommendation for the company in may, which raised the purchases from the previous keep, with a target price of sek 64. 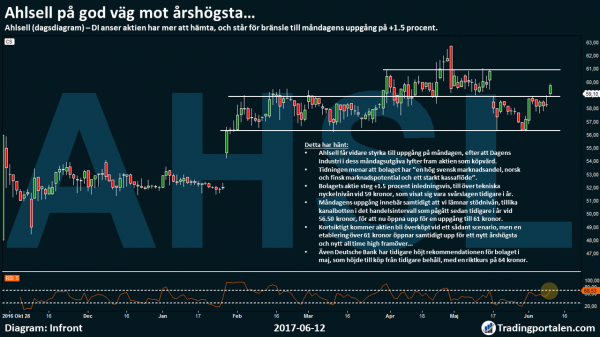 Temporary break, or is it time to look to the south…?

Apple declined -3.9% in Friday, which means that the decline was so significant that the support level at 146 dollars was challenged seriously.

For Apple’s part, it was negative sentiment after some analysts believe that the upcoming version of Apple’s smartphone, the iPhone 8 may be slower than the rivals, when it comes to the speeds promised by, among other us operators Verizon and AT&T.

Before Friday’s decline was trading Apple around the all-time high, and has now not only turned from this price level, but also from the high for the year, and from kanaltaket in the long-term rising handelsintervall.

The question we ask ourselves is, whether it is time to turn their attention to the south in the future…? 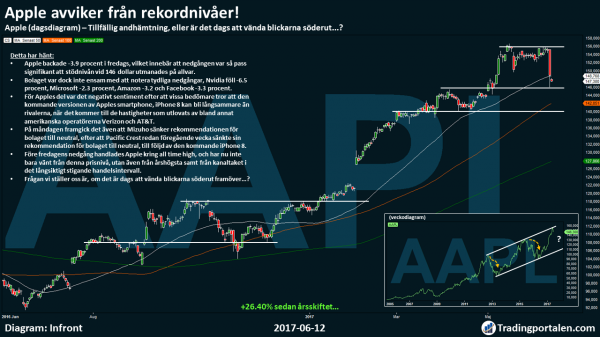 The stockholm stock exchange followed the general pattern down on Monday, led by the technology sector but also the workshop.

Tekniktappet took off in New York on Friday evening. Robert Boroujerdi, an investment director at Goldman Sachs, warned that the low volatility in the popular stocks like Facebook, Amazon and Apple obscures the risks cyclicality and upcoming rule changes.

OMXS30 index ended down 1.0 percent to 1.639, with significant declines in most sectors. The turnover on the stockholm stock exchange was sek 18 billion.

Several Europabörser developed much like Stockholm, and among the nordic growth companies was the decline, after all, limited. Ericsson fell 0.5 per cent and Nokia was 1.9 per cent.

Fingerprint Cards were recorded over 5 per cent lower, after rising for several days in a row. Carnegie considered in an analysis to analyst expectations of biometribolaget is still too high and that more disappointments are on the way. Recommendation sell repeated as well as riktkursen sek 22.

”We need to see a stabilization in market share and the asp (average per sensor) together with a significant commercialization in new verticals,” wrote the bank, which expects an operating profit of 123 million for the second quarter of the year – far less than konsensusförväntningarna according to SME direkt, which is 222 million.

On verkstadsfronten backed SKF 2.8 per cent and the Volvo 1.7 per cent. Sandvik fell more than 3 percent.

The SCA set aside the right to the dividend of hygiendelen Essity on Monday, and its shares fell almost 80 percent. Essity is still included in the index on Monday, according to the Stockholm stock exchange, information is sent to Direct, so indexeffekten of the maneuver should be theoretically neutral.

As a counterbalance to nedåttrenden were Lundin Petroleum, which rose 1.1 percent after a outperformrekommendation from BMO Capital together with the rising prices of crude oil.

Johan Proms exit from the Avanza after only half a year in the ceo seat, which led to a decline of 3.2% for the nätmäklaraktien.

Another notable defection was the Sensys Gatsos director of business development and former ceo, Johan Frilund, who is leaving the company at his own request. Sensys Gatso fell more than 6 per cent.

Allgon rose above 4 percent after the Smarteq Wireless, which is included in the group, has been selected to antennleverantör for the machine charging posts for electric vehicles in Italy.

Oasmia declined more than 13 percent to 3:50 on the news of an upcoming new share issue to raise sek 164 million for the course, 3:25 sek.

Paxman, the First North-debutant in medicintekniksektorn, was trading up almost 15% from the course 9:50 sek in a share issue before listing, to 10:90 sek.