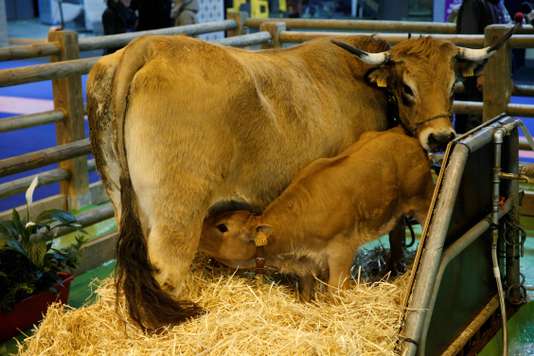 Mount Milk, The 30 farms Cant ‘ Avey’Lot, Laitik The Authentik, Centre Val de Loire, FaireFrance, Equilait 72 and, of course, is that the boss ?! : initiatives to better valorise the milk carton are increasing in the supermarkets. Attempts to get out of the price war, the source of non-rate-profitable for the dairy farmers. The latest draft is not the least media.

Intermarché, after having communicated widely about its promotions at discounted prices on the jars of Nutella to give the image of a brand cheap, wished to rebrand highlighting commitment from a group of breeders. Under the name ” the breeders say thank you “, the brick of semi-skimmed milk is sold at 0.88 euro, half of which is paid to the farmer, paid 44 cents per litre.

La laiterie Saint-Père, Saint-Père-en-Retz (Loire-Atlantique), key 22,52 % of the amount paid by the consumer and the distributor, 21,98 %. Small detail which has its importance : that dairy belongs to Intermarché and teaches limit the offer to 5 million litres per year. This represents only a part of the production of the 136 farmers who supply the dairy, but it is a way of giving wages to the government at the conclusion of the general state of the power supply.

A lot of other brands, they rely on the laiterie de Saint-Denis-de-Hotel (LSDH). Located in the Loiret, this independent company, run by Emmanuel Vasseneix, has, as of 2012, put in bricks, the milk of FaireFrance. A label launched by a group of breeders distributed all over the territory and who had chosen out from the top after having drunk the cup to the result of the dairy crisis of 2009.

Other breeders have followed this path, to the image of the 30 farms Cant ‘ Avey’Batch or Centre Val de Loire, which play the card of the local supply and also have…