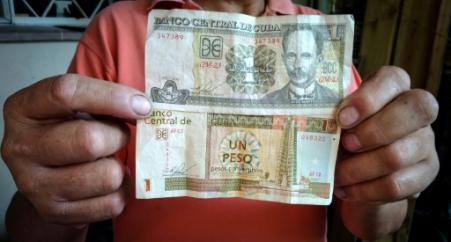 A worker cuban shows 1 CUP (cuban peso) 1 CUC (cuban peso convertible) in Havana on February 8, 2018. Cuba will try this year to unify its currency and the exchange rate (Photo by Adalberto ROQUE. AFP)

For 24 years, the Cubans are accustomed to juggle with two national currencies, a system unique in the world in which the authorities are determined to renounce, at the risk of disrupting the fragile economy of the island.

Established in 1994, the duality of currency is the norm in Cuba, with the cuban peso (CUP), used for transactions strictly domestic, and the convertible peso (CUC, equal to the u.s. dollar, which is worth between 24 and 25 CUP) which was used initially to pay for goods and services imported.

The government has announced in recent years their intention of abandoning the dual currency, but this reform is also crucial that the complex was several times adjourned.

By the end of 2017, president Raul Castro has said that the country needed to launch the project without further ado, heralding the implementation likely before his departure set at April 19. Many observers believe that the next meeting of the central Committee of the cuban communist Party (PCC) in march could give the kick-off.

First reserved for the tourism sector, the CUC has gradually generalized. Pay with one or the other currency, “it is the same thing, a bottle of oil has the same value. Now we all have the right to buy in national currency (CUP or CUC,” details Marlen Leyva, retired 68-year-old.

With the CUC, the State allows its businesses to import at an exchange rate of prime – dollar for one cuban peso -, so that the greenback is theoretically twenty-five times more expensive. It is the ministry of foreign Trade that compensates for the subsidy barely disguised.

A distortion that allows state entities to insure their margins while providing the population with affordable prices, in a country where the average salary is around $ 30.

The double currency has enabled it to face the imbalances of the crisis in the 1990s, following the fall of the soviet bloc, and then facilitated the entry of foreign currency.

But the cuban economy, which comes to renegotiate the bulk of its public debt, now has to regain credibility and readability.

“The duality of money creates difficulties in assessing the economy and competitiveness”, explains to the AFP, the economist Omar Everleny Perez, citing a complicated relationship with the international markets, already constrained by the us embargo imposed since 1962.

Since 2014, in the wake of the first reforms, opening to the market economy launched by Raul Castro, economists cubans and foreigners are betting on the way to put an end to this system while limiting its impact on an economy that is still state-owned at 85%.

The master-piece of the reform, Marino Murillo, has already announced that “the cuban peso became the official currency and the convertible peso would be eliminated gradually”, without more details. Many economists advocate for a reform of the state sector before spreading to the single currency. For the past two years, flows from the new notes of 200, 500 and 1,000 CUP to simplify transactions.

Omar Everleny Perez said the private sector, while still embryonic, is already working since years with a rate of 1 for 25: “We may think that we will not be far from this level,” after the unification.

Theoretically, State-owned enterprises will have to import at an exchange rate of “normal”, but many economists believe that The Havana does not have foreign currency reserves sufficient to maintain them.

Conversely, in the new system, a few cuban enterprises exporters would receive more pesos, and could partially compensate for the impact on the economy.

“The sectors that benefit could be in a position to pay better wages, but the companies penalized are expected to close or merge,” predicts the eminent economist Pavel Vidal.

And the fear of higher prices could cause a phenomenon of on-demand, difficult to meet on an island that imports 80% of what it consumes, said Mr. Perez, anticipating imbalances in the short term.

A perspective that is disturbing, then, that the “libreta”, the ration book history, already covers most of the needs monthly to a family.

For Mr. Perez, it is essential to support this reform through further opening to foreign investment and the private sector, in order to stimulate inflow of foreign exchange and increasing purchasing power.

“If (foreign companies) are already positioned, it is that they do not really care of the us embargo”, argues the economist.