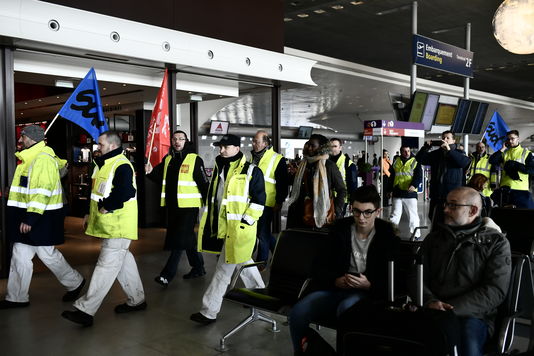 “This is only the beginning,” warns the tract of the intersyndicale of the ten organizations of Air France (FO, SNPNC, CGT, UNSA, SPAF, SNPL, Alter, SUD, CFTC, SNGAF), in the aftermath of the strike on 22 February. For these unions, the first day was ” a great success “. Sandrine Techer, secretary of that section of the Syndicat national du personnel navigant commercial (SNPNC), which makes it even more lyrical : “It was a beautiful day, which will be inscribed in the history of trade unionism” of Air France.

For the first time since 1993, ten organizations representing all categories of staff, the pilots, the hostesses passing by the employees to the ground, had called for a day of strike action. According to the statements of the unions, ” more than 300 flights were cancelled Thursday “, welcomes Ms. Techer. In detail, more than 56 % of flights short-and medium-haul flights have been cancelled, as have 51 % of the long-haul.

Meeting of the unions on 5 march

But, for the intersyndicale, the fight continues. “The ball is in the camp of management,” analysis of the representative trade union. For the time being, this prayer remains a pious wish. “There is no contact with the leadership,” laments Sandrine Techer.