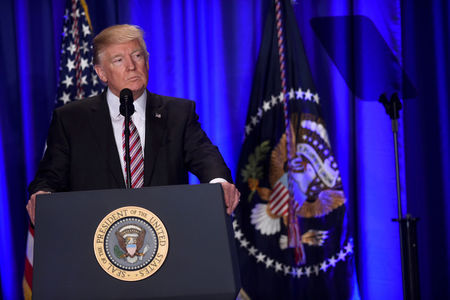 The United States are not ready to conclude a trade agreement with China, said president Donald Trump during an official visit to Japan on Monday.

“I think they would probably want to have entered into the agreement that they had on the table before you try to renegotiate it “, said Donald Trump on Monday during a joint press conference in Tokyo with japanese Prime minister Shinzo Abe. “They would like to reach an agreement. We are not prepared to enter into this agreement. “

Trump, who is in State visit to Japan, said that the u.s. tariff on chinese goods ” would increase very, very substantially, very easily.”

His comments were made after the trade talks between the two countries is mired for several weeks.

Since then, China and the United States reject each other the blame for the derailment of the discussion, and Trump has threatened to impose customs duties of 25% on a new tranche of $ 300 billion of chinese imports to the USA, which would, given the wave of rates previous to tax the quasi-totality of chinese products imported by the United States.

Trump has also indicated that companies were leaving currently China for countries without customs duties, including the United States and asian neighbours such as Japan.

However, he also said he was optimistic about the possibility that the largest economies in the world to reach the final agreement.

“I think that in the future, China and the United States will enter into a commercial agreement important, and we look forward to” , he said.

It is estimated that China will not be able to afford much longer to pay the customs taxes punitive US :

However, China does not have the same bell sound, and does not seem worried. Indeed, it has postponed this weekend the presumption that the tariffs of Trump harm to its economy.

Guo Shuqing, director of the chinese institution of regulation of banks and insurance companies, said that higher rates will have an impact “very limited” and that they detract also from the United States.

Guo is the most senior chinese financial to have commented publicly on the stalemate trade since the deterioration of the negotiations.

A commentary published by the official news agency Xinhua News Agency accuses the United States of making China its “scapegoat” for its trade imbalance and even for some of the inner economic problems.

“The United States tries to pull out of China a trade agreement unfairly resorting to measures such as rate increases and targeted technology companies the chinese “, he said, while praising the “greatest sincerity” of Beijing in the negotiations.

It should also be noted that it is clear that China has stepped up its speech anti-american since the negotiations have failed and that Trump has put Huawei and a large number of its affiliates on the blacklist at the beginning of the month, in order to restrict its access to the u.s. market.

The trade war between China and the United States is not ready to finish. However, as pointed out in recent articles, it is possible that this trade war turns into a war of technology, and/or in a currency war…