Business Sweden, the exportchefsindex fell to 58.9 in the third quarter from 62,8 previous quarter.

The survey is carried out among exportansvariga in 225 companies. A exportchefsindex over 50 means that there are more who believe in a strengthening of exports than a depreciation, and vice versa.

Lena Sellgren, chief economist at Business Sweden, stated at a press briefing that the current situation looks stable, but we have a fairly large decline three months in the future, and the forward-looking index is below the historical average.

”There is a muted optimism, but we are not under the magic 50 mark that indicates growth,” she said.

Chefekonomen said that all of the forward-looking questions show a decline, but only the delivery time falls below the 50-level. Shorter delivery times indicates lower resource utilisation at the companies and ”is a clear signal that the activity is attenuated”.

She noted that it is going very well in the domestic market, but think that exportorderstockarna should have been slightly higher, especially given the very high Swedish GDP outcome for the second quarter.

One explanation may be that the Swedish krona has strengthened over the summer, which also can be reflected in a decline in optimism among firms about the profitability.

”I think it’s about that we got a bit stronger krona and that you do not see an equal expansionary monetary policy in the world to come,” said Lena Sellgren.

The expected export demand has mainly increased from south America. The region is, admittedly, only 2% of Swedish exports, but the companies are talking about increased activity in the region and a little more stable political position (with Venezuela the exception).

At the same time, expectations for export demand from Western europe fell from the previous quarter and Lena Sellgren think this is related to the brexit negotiations now up and running and that you have a date for the british withdrawal from the EU.

”I believe it is because companies are now forced to think about what brexit will mean for them,” she said and added that Business Sweden is trying to help companies with information so that they can focus on their business.

Chefekonomen makes the assessment that we will see a relocation of trading in Europe in connection with the brexit. 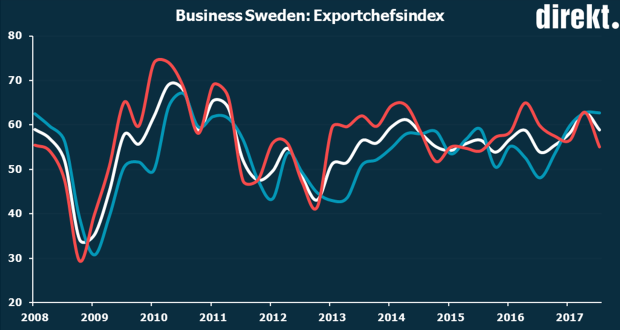