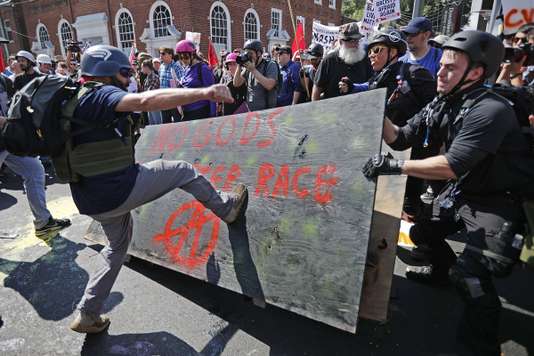 The contrast was in the process of organizing. A year after the riots of August 12, in Charlottesville (Virginia), which saw demonstrators from far-right protest against the déboulonnage of the statue of the general of the south Robert Lee and result in the death of a counter-protester, the far right has planned to protest in Washington, under the slogan ” unite the right “. The response, she, too, grew up with counter-demonstrations. And on Facebook, a page entitled ” face + resist fascism “, invited to gather in the federal capital on 10 and 12 August. The page promoted by the “Resisters” had to be given all the logistical details : 2 600 users have shown interest and more than 600 people have expressed their intention to participate in the event.

Except that the “Resisters” do not exist. They are part of the 32 fake accounts on Facebook that the group of Mark Zuckerberg has flagged for the past two weeks and it has announced the deactivation Tuesday, July 31. These accounts have strong similarities with those that manipulate the Internet Research Agency (IRA), officine Russian, accused by the special prosecutor this winter for attempting to manipulate the american election in 2016. Facebook can not say that Russia is behind these new manipulations and precise that their operators will mask much better their identity as two years ago. But it is because of the impending anniversary of the tragedy of Charlottesville that Facebook, which is working with the FBI, has publicly acknowledged.

The “Resisters” had already invited to gather at Times Square, New York, for the anniversary of the election of Donald Trump, on 4 November 2017, subject to the call of “the history has learned that fascism had to be stopped before it’s too late,” and accompanied a photo of the president of the United States vociférant. This time, they are grafted on to associations that seem to exist truly, to…