Lufthansa which is one of the world’s largest airline since the end of 2016 experienced a sturdy trip to the north. The company’s share is now clearly overbought since earlier in June, and are now beginning to signal that it is time to drop the height…

Since the end of 2016, the German airline Lufthansa has risen over +60%, a journey which has taken us up to the sentimental heltalsnivån 20 euros, and treårshögsta.

The company’s share is then earlier in June is now clearly overbought, and has actually been just below this level since the great rise in the beginning of the year.

Köpstyrka has, however, slowly but surely slowed down in connection with the upturn, which means it rather looks like that we get to a turning point just below this sentimental resistance level of 20 euros.

We believe that we have an attractive säljläge today at 19.950€.

In the short term we see a high probability that the first port of call will be 18.600 euros, and in the slightly longer term we turn our eyes all the way down to around 17.200 euros.

Would a global negative börssentiment occur in the fall, when several leading stock indexes are around record highs, yes then there is a further drop to retrieve the check, whereupon it may be an idea to weight the bottom and not close the position in the context of the achievement of levels of support.

Medeltalstrion as 50, 100 and 200-day moving average still points clearly to the north, and it would appear that we got a false sell signal, is limited to a possible loss by tentatively placing a stop loss at the 20,500 euros.

Worth to keep in mind is that the company already on July 11 will present trafiksiffror for June, which may affect the sentiment.

Lufthansa will also present the interim report on 2 August.

On Friday, it was revealed that the company has been voted as the best airline in Europe. Skytrax, which conducted the survey, gathered the opinions of about 18 million passengers from 160 different countries.

The shares are traded on Xetra, under the symbol LHA. 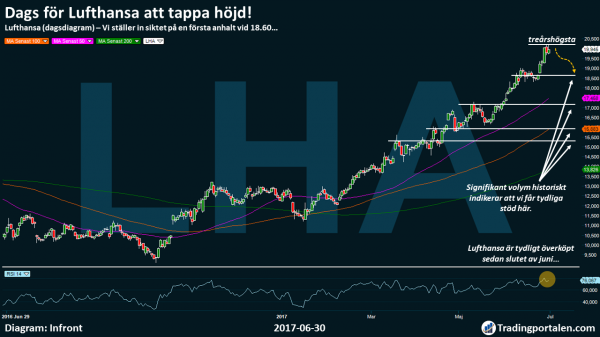