When Royal Gold topped in August last year, where the signal is relatively clear. It may come with a hefty recoil, but we are not clear on the upside! Gold has now at long last, it seems, have begun to find positive momentum on the compass which points north. In relationship so has, unfortunately, gold stocks have been weak, but Royal Gold is one of the shares leveraret and the share is on its way to signal for continued supply in the coming weeks and possibly more.

An important factor for the pricing of guldminingbolagen is, of course, the price of gold. And as we can see, the trend is then a good while now positive. This applies not least since the bottom in december last year, the right bottoms and higher tops is the melody since then. Note how the price of gold you have broken the descending trendline that succeeded in keeping back the price since it topped in 2011. 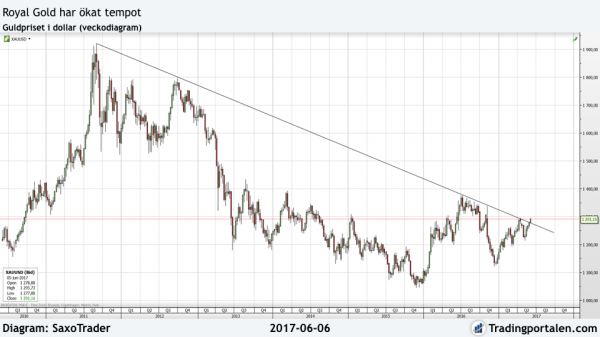 The price of gold in dollars (veckodiagram)

Now it is not the price of gold itself we analysis here, but the development for Royal Gold. The share bottomed in January 2016, and gave then away on a cruel journey towards higher heights, a journey that came to an end in August 2016. A pretty hefty rebound followed, but in relation to the previous trend, it was more of a lateral cutting rather than something stronger race, which is positive.

On 20 december last year stemmed from the share and set off in the positive direction, this at the same time that we had a negative cross between our moving average 50-day and 200-day. On 8 march we got a double bottom, a bottom that probably marks the bottom of an elliott wave two before the market sends the shares in a tredjevåg up. The tredjevågen is often the strongest and longest in a positive cycle. Our expectation is thus, on continued upward movement for a longer period.

Price-wise, the shares have been traded just below a significant resistance at 81 dollars. A closing above this level allows a movement to the 101 dollars in the current phase. Would this level be taken out, we draw on further and aim 121 dollars, but it may be a later issue.

Relatively recently, around the 23 may, the 50 day simple moving average back lost ground and now finds itself above the more rigid the 200 day moving average. A now relatively strong trendande 50-day moving average indicates that the trend in Royal Gold is positive on the medium-term. 200 days is more or less horizontal, indicating that the long trend is in a consolidation phase. 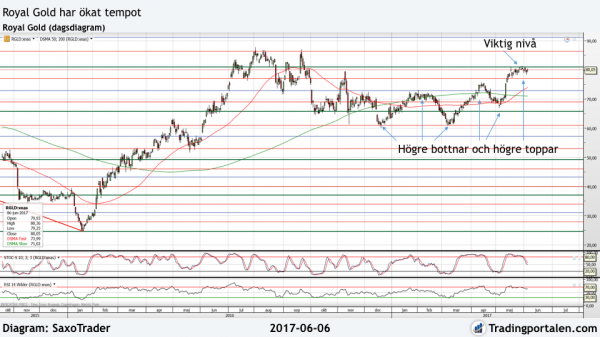 The daily oscillators have relatively recently turned down from overbought levels with a negative disparities. At the same time, the closing share price of 81 dollars can these disparities be eliminated, and in the current phase of the so, the oscillators stay high for a longer period. They say that the oscillators lying and rolling on the high levels ‘ of ice snaking”, i.e. meander like a snake.

Close to Royal Gold over 81 dollars, there are good opportunities for continued strong momentum. It can even be so strong that we can take a view on the 101 dollar level. At the same time, one must be humble, köpsignalen must be generated, and fold the market down, we need a stop-level. The stops may be appropriately placed at a previous short-term bottom before the outbreak. Currently, we find such a level of 78 dollars. Buying is recommended on a daily closing above 81 dollars with a stop on a daily close below 78 dollars with a target level of 101 dollars.