Getinge share has recently triggered a new buy signal by force the resistance at 180kr, which opens up for further rise towards 195 followed by 223kr.

Getinge share’s long-term price trend after a bottom around 139 euro from 2010 traded up to a top listing on 244kr in August 2013. In the beginning of the 2015 was tested the resistance just below the previous peak at the 237kr so forcefully rejected and the shares have subsequently shown a weak development at the end of last year led to a test of the six-year intervallgolvet around 139kr where a powerful köprespons were presented.

This köprespons has subsequently been confirmed through a successful återtest of support around 139kr in February. In the long term, the shares have good prospects in the long term, take up to intervalltaket around 237kr so long as the share forces, the resistance and confirm that these have been converted to support when tested from above.

Recently, the share price closed above 180kr on a weekly basis which confirms a positive outburst, which opens up for further rise towards 195 followed by 223kr. We see a new köpläge reveal himself in a test of 180-181kr from above. The emergency exit is placed preferably at a closing under 176kr. Målkurs are set conservatively to 194.50 bc

Would the share the against all odds show weakness by significant shut down during the 180kr is the former köpsignalen omkullkastad and expectation in this scenario is continued decline against the 165kr.

The share traded above the long-term rising 40-week moving average.

The stock is traded on the stockholm stock exchange, under the symbol GETI B. 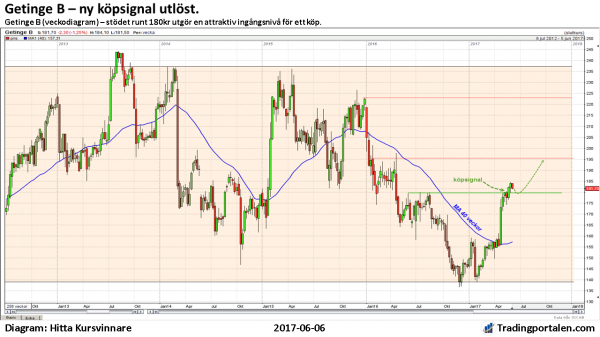