When we look at the broader u.s. market flirts now with the ability to signal further gains, not only in time but also in terms of the essential, the price. Bank stocks are defined as the u.s. ETFen with ticker XLF put yesterday the highest notes, and knocked out the potential tidstoppen from in the beginning of the month of July. We are looking for thus interesting bank stocks for long positions. Today, we focus on Goldman Sachs, which has a very exciting relationship between risk and reward!

There were and are still part of scepticism to a positive scenario for Goldman Sachs, then we have difficult to turn a blind eye to the fact that pristräffen at the top, on march 3 earlier this year came in near enough 360 degrees on the Gann wheel towards the bottom on 28 June 2016. Such a relationship can definitely put point for a whole trend. At the same time, we did not really tidscyklarna at the top in the spring.

The ongoing appreciation in price took his beginning early in the summer, namely during the first trembling days in June. Those who are working to combine Elliott wave theory with the Gann now finds that the rise from the June 28, 2016 next to the top in the beginning of march 2017 is in near enough a 360 degree relationship to the bottom in the beginning of June. When now is not the time passed in the case in the past, we open for the possibility that the rise is not yet reached one, especially when we get together the time for a possible lågpunkt.

Elliott wave theory says that a uppgångsfas shall consist of five waves, of which three are positive, separated by rekylvågor which would therefore be two in number. It is possibly not obvious visually when it comes to Goldman Sachs, but when we see that a possible wave 1-3 are in the 360-degree relationship with a possible wave 4 we are with even on the ball.

An exciting feature of the graph of Goldman Sachs is the stylish cross-check with the Gann level of 218 dollars on 24 July. 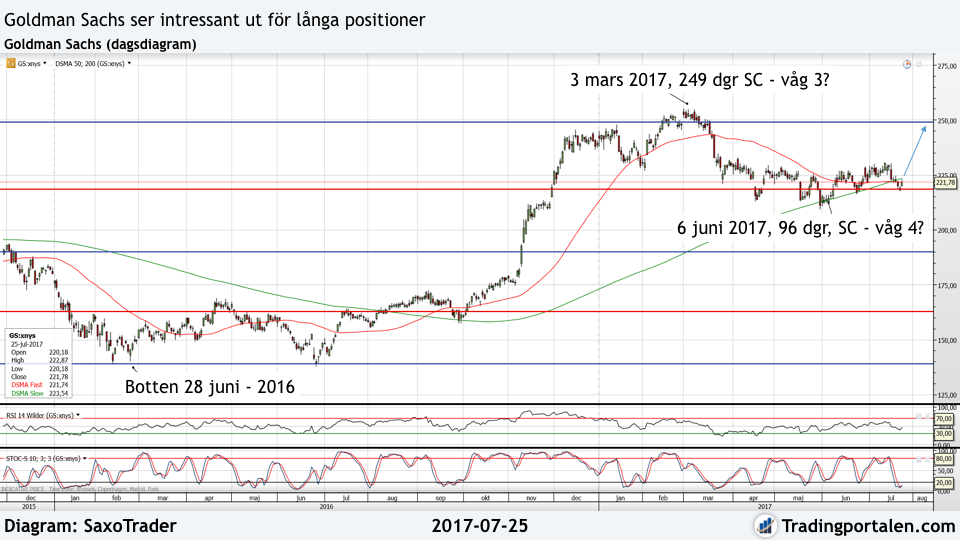 When we turn to the classic technical indicators breakouts we will 200-day moving average is positive, the 50 day average is horizontal. This indicates that the long trend remains positive at the same time as the medium trend is neutral. A situation one can expect in a situation where we are looking for an intermediate lågpunkt in a long-term positive trend.

The oscillators are down, the RSI on a daily basis have begun to trenda up with the lågpunkten in the beginning of June and the Slow stochastic indicator has just turned from downtrodden levels. This fits well into a positive scenario in the future.

Given the situation of Goldman Sachs, the market in general and bank stocks in particular, it is appropriate to have a positive attitude as long as the 218 dollar level is. We can certainly already have gotten into a pristopp in Goldman Sachs at 255 dollars in the beginning of June, but a serious återtest of this level is now logically in the cards. One can thus, as Goldman Sachs has already reported its half-year results, buy the stock above yesterday’s maximum of 223 the dollar with a stop on a daily close below 218 dollars. The target we set just under the peaks from June of 249 dollars, which is an important level according to the Gann wheel.

Subject to to put a trigger in the current set-up is that the broad american index SP500, flirts with the out of Ganns perspective is very important 2 476 level. Fails, the broad market here, you get a GS to default and you should not throw away either of dollars or of dollars unnecessarily. We simply want to try to filter out the risk of a false signal.