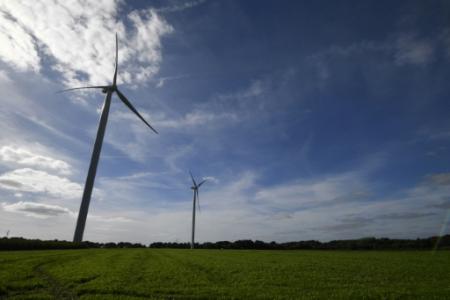 The price of electricity produced by the future installations of onshore wind turbines will be “significantly below” the previous rate of purchase, according to the early results of a call to tender issued Wednesday by the government, illustrating the increasing competitiveness of renewable energy.

“The results are unambiguous: the maturity and competitiveness of onshore wind energy and more generally renewable energies are a reality”, said the minister of the ecological Transition and solidarity, Nicolas Hulot, who is quoted in the press release.

Twenty-two award recipients have been selected to install onshore wind turbines with a total capacity of 500 megawatts (MW) and a weighted average price of 65,40 euros per megawatt-hour. The latest price of the purchase, set in 2017, had been fixed by order of 72 € /MWh and does not relate to installations of less than 18 MW.

To Marion Lettry, delegated to the deputy general of the renewable energies Syndicate (SER), these results demonstrate that wind energy “can play an important role in the energy mix French”, at a time when the government is working on the multi-annual Programming of energy (PEE), roadmap of the energy ambitions for the years to come.

The 500 MW allocated on Wednesday represent only the first wave of a call for tenders total of 3 GW, which must be spread over three years.

This procedure is a first for the sector since the modification of the support mechanism for onshore wind in France, which occurred last year.

Previously, the electricity thus produced was bought by EDF (PA:EDF) at a rate defined by the public authorities. Now, it will be sold at the market price, which will add additional compensation will be guaranteed for twenty years, the candidates claiming the add-in, the lowest being preferred.

A third of the projects will receive more of a bonus for having been the subject of a crowdfunding.

These results “will lead the government to favour this procedure (tender) for future projects by redefining the scope of projects eligible for support in the form of tender and price of purchase” (the old system less competitive ED.)

For the SER as for France wind energy, the association which brings together manufacturers in the sector, this announcement is a “bad signal” is sent to the supply chain.

“We want to get things done in a gradual manner and in consultation with the industry,” said Ms. Lettry, deeming it “important to maintain these two devices in order to ensure a harmonious development of the wind farm on the territory as a whole”, and not confined to the regions most windy or the most accessible.

“The players need stability,” added the France wind energy, stating that the current regulation had just a year ago. According to the association, to expand the system of call for tenders to smaller installations risk of “putting in danger a number of projects”.

These criticisms are a result of reactions which are more favourable from mid-January, when Mr. Hulot had unveiled measures to remove the obstacles to land-based wind farms.

Among the ten measures presented included the modification of the allocation of tax impact, to increase the share that accrues to municipalities with wind turbines, and the removal of a level of jurisdiction for the appeal, which will be dealt with directly by the administrative courts of appeal.

In 2017, 1.797 MW of wind power have been connected to the network according to the “overview of the renewable electricity” released in early February. “This is the best year ever made”, had responded to the AFP Jean-Louis Bal, president of SER.