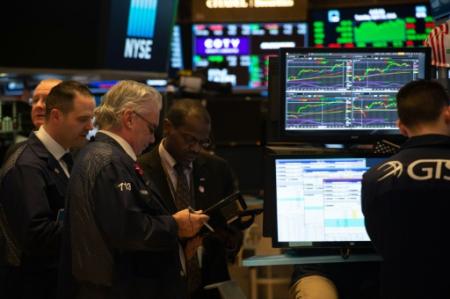 Wall Street ended down on Friday, affected by a marked decline in the prices of financial stocks after the release before the session of the quarterly results of banks JPMorgan Chase (NYSE:JPM), Citigroup (NYSE:C) and Wells Fargo (NYSE:WFC).

On Friday, JPMorgan Chase (-2,71%), Citigroup (-1,55%) and Wells Fargo (-3,43%) have declined sharply despite a record-high profit of $ 8.7 billion for JPMorgan Chase, a rise in the net income of Citigroup of 12.96% to 4.62 billion dollars and a net profit higher than expected for Wells Fargo. This last has, however, been affected by the risk of a fine of a billion dollars to the bank because of the recent scandals.

“It seems that the expectations were too high” on the results, noted Art Hogan of Wunderlich Securities.

To continue to rise, the profits of the banks “would have had to be extraordinary, which was not the case”, has also commented on Tom Cahill of Ventura Wealth Management.

Accordingly, “when the financial sector started to fall, he has taken away the entire market with him,” added Mr. Hogan.

Also in the spirit of the market actors, the situation as diplomatic as the u.s. president and his allies are considering a military response in Syria, an ally of Moscow, following a chemical attack alleged by the syrian regime.

“One of the big questions is whether the new geopolitical and commercial adouciront enough to enable the market to fully concentrate on the earnings season which promises to be strong,” said Karl Haeling of LBBW recalling the growth expected average of 18.5% of the profits.

Among the other values of the day, General Motors (NYSE:GM) has declined (-0,26% 38,73 dollars). The automaker is going to delete over a thousand jobs in a factory of production in the united states to adapt to the lower demand for sedans and city in the United States, said Friday the automaker.

Tesla (NASDAQ:TSLA) has earned 2,13% to 300,34 dollars. Its CEO Elon Musk has stated on the social network Twitter (NYSE:TWTR) that the group would be profitable in the third and fourth quarters, with a positive cash flow.

The semiconductor manufacturer Broadcom (NASDAQ:AVGO) has increased (+3,14% 246,94 dollars) after it announced a share buyback programme for an amount of $ 12 billion.