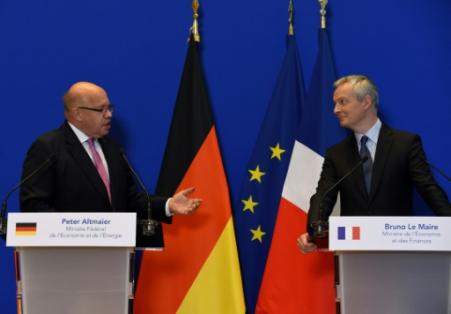 The French minister of Economy and Finance Bruno Le Maire and his German counterpart, Peter Altmaier, said on Wednesday evening wanting to advance “hand in hand” in the midst of rising tensions in global trade.

“Germany and France have always advanced hand in hand, on the issue of world trade, I can guarantee you that they will continue to move forward hand in hand in the weeks and months to come,” said The Mayor at a press briefing organised at his ministry after an interview with Mr. Altmaier.

“We are concerned that the american decisions on trade. We consider that the increase in the tariffs decided by the american administration is both unjustified and unjustifiable”, had declared in the preamble to The Mayor, believing that “the european Union has had the right response: a strong response, a measured response and a response together”.

“Whatever the decisions to be taken by the american president in the months to come, we believe, with Peter Altmaier, the european response must remain a response to a united and firm response. Nobody will divide France and Germany and no one will divide european nations”, he continued.

If it has recognized “a number of difficulties to resolve on the issue of trade”, such as “the issue of overcapacity of steel and aluminum”, The Mayor says he is ready, with his German counterpart, to work on it with their “american friends”, but “not of the gun to the temple”.

To illustrate concretely the franco-German cooperation in the economic field, Bruno Le Maire, and M. Altmaier, have supervised the signing of an agreement between the public investment Bank (BPI) and its German equivalent, the KFW, which “will allow the realization of co-investments in funds franco-German venture capital both sides of the Rhine.

“It means the mobilization of up to a billion euros of public and private investments that will provide the means to the best national players of the venture capital to become european for the benefit of the start-up in growth in all sectors, the digital, biotechnologies, eco-technologies”, has listed Mr. Mayor.

The european fund for innovation –

“We’re worried, of course, because this vicious circle of actions and reactions in relation to China and the United States clearly show us the danger and risks that arise in relation to world growth”, said Mr. Altmaier.

“Our goal is to avoid, if possible, a trade war, because at the end of such a war, there will be no winners, there are only victims on both sides of the Atlantic and at the global level”, concluded the German minister of Economy and Energy.

The Mayor reiterated the willingness of France to create a fund for industrial innovation of the ten billion euros that will be funded by asset disposals in Aéroports de Paris (ADP), the French Games and the electrician Engie (PA:ENGIE).

“We want this fund to be the precondition for a european fund of the innovation and without a doubt, it will begin with Germany, to finance projects that are very concrete in the areas of new technologies,” said The Mayor, supporting the proposal made by his counterpart, “an Airbus (PA:AIR) of the artificial intelligence”.

“We were given with Peter until the end of the year to finalize the joint project outline and begin to set a schedule,” concluded The Mayor.