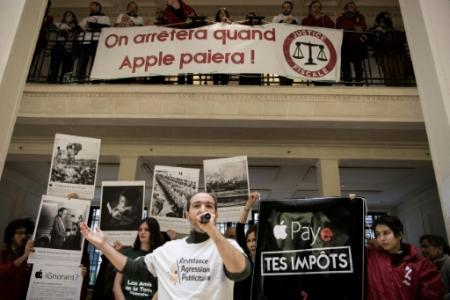 The occupancy on December 2 to an Apple store near the Paris Opera by a hundred activists of Attac (Photo by CHRISTOPHE ARCHAMBAULT . AFP)

The justice rejected the appeal on Friday in Paris, the american group Apple (NASDAQ:AAPL), which asked him to prevent Attac of entering its stores French for militant actions, that the association is anti-globalization, denounced as a “how to gag”.

The “imminent” relied on by Apple to justify this request is “not characterized”, explained the tribunal de grande instance (TGI) of Paris, who was seized in summary proceedings, in a decision seen by AFP.

The american group had filed the summons at the end of December, three weeks after the occupation of his store near the Paris Opera by a hundred activists of Attac, who came to denounce “tax evasion massive, practised by apple”.

“Two days earlier, we had been received by the head of Apple France, but this has been a dialogue of the deaf, all that interested them was whether we had to continue our actions”, said to AFP the spokesman of Attac, Raphael Pradeau.

In order to justify its assignment, the trade mark apple had pointed to the “imminent risk to Apple, its employees and its customers” that would run the activities of the association.

“Attac threat to repeat actions that have already caused harm to Apple and that will lead to vandalizing the stores operated by Apple, as to endanger the safety of its employees and its customers and to cause commercial harm to Apple,” said then the tech giant in its application to the TGI.

“The mere penetration of militants in the walls of the store (…) was not sufficient to establish imminent injury”, has on the contrary believed the judge on Friday.

– Neither violence nor degradation –

Contacted by AFP, Apple was not available immediately for comment on this decision.

Attac has its side welcomed this decision. “The court recognizes the legitimacy of our actions, and going so far as to say that we are in the general interest and that we are entitled to carry out such actions, even if it does not, of course, on the subject of background,” said Raphael Pradeau.

Attac led to several actions on November 3, the date of the release of the latest smartphone from Apple, the iPhone X, in the shops of Paris-the Opera and Aix-en-Provence, in the framework of the campaign #ApplePayeTesImpôts.

Pluiseurs activists of Attac had also invaded the store of the Paris-Opéra on 2 December, in the framework of this campaign.

Noting in particular the occupation of December 2, the tribunal considers that “the penetration took place without violence,” and that the evacuation of the store took place spontaneously, without the intervention of the forces of order.”

“No degradation is relied on by Apple, who speaks of +vandalism+ or for actions that put at risk the safety and security of employees and customers in the extracts of the newspapers cited, without specifying such damages in his summons, and without a justification by the production of evidence,” adds the court.

The association alter-globalization, which has already carried out a series of actions against Apple for “to denounce tax evasion” practiced according to it by the group, does not stop there.

“Even sentenced, we would have continued our action against the tax avoidance of Apple, we would have simply adapted. Apple was concerned about a rise in power, this decision gives us precisely want to continue,” assured Mr Pradeau.