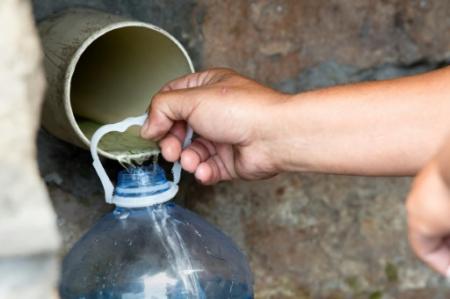 Residents are supplying drinking water flowing from a hose connected to a ground source on January 19, 2018 to St. James, 25 km from the city centre of Cape town (Photo by RODGER BOSCH. AFP)

In the middle of his property and the surrounding area of Cape town, Marlize Jacobs is concerned. The historic drought which has struck the second largest city of South Africa has placed its vines in the ordeal, and now threatens to jeopardize its entire business.

“Our tonnage declined for the fourth year in a row and the shortage of wine threat,” laments the winemakers, established for more than ten years on the slopes of the usually green of Vergenoegd.

“The costs related to water have almost doubled,” sighed she, “we only use the water strictly necessary to keep the vines alive, not one more drop”.

Cape town and its region have been suffering for three years of exceptional drought which deprived them of most of their winter rains.

The threat of the famous “zero-Day” or “tap water” and the prospect of rationing of the population, agitated for months by the authorities, has been ruled out for this year at the price of a drastic reduction of the consumption of individuals.

Residents are using more than two-thirds (70%) of the total water consumed by the city, but the economy has not been spared from the necessary restrictions of consumption.

As of January, the financial ratings agency Moody’s has warned that it would degrade without hesitation the agglomeration to the rank infamous investment “speculative” if the water crisis is going on.

Little more optimistic, the authorities of the province of the western Cape has conceded that “the persistent drought has degraded (its) growth forecasts compared to those in the rest of the country and is now threatening the level of employment”.

Agriculture and particularly viticulture, which is the prestige of the back-country captonien and employs tens of thousands of employees are subjected to strain.

The decline in its activities due to drought has contributed, among other factors, to plunge South Africa into a recession “technical” beginning of 2017. The sector has since started to rise again, and the region has breathed a sigh of relief.

In 2016, the Cape region has provided to it only 20% wine and 16% of fruit juice consumed in other african countries. The vines drain also in the area, a strong contingent of foreign visitors whose flow is vital: the tourism sector provides around 300,000 jobs to the region.

The other affected area, that of public works. Some works could not be completed by means of distant supplies of water. The others have been purely and simply suspended.

The group Rabie is now using wastewater to manufacture its cement on the construction sites of the Cape, at a high logistical cost increase. “It increases the price of construction,” says his boss, Miguel Rodrigues.

In 2016 already, 94% of local businesses had listed the lack of water as a risk to their activities.

In contrast to individuals, professionals, however, have been, as far as possible, spared the daily limits of consumption strongly suggested by the authorities.

“This is to avoid creating another crisis in the crisis”, argues the elected official in charge of security at the municipality, J. P. Smith, “the public works sector is already very fragile, if you cut the water you put in clear danger on the job.”

To convince consumers to reduce their use of water, the municipality has even had to resort to academic experts in the science of behavior to develop the best strategy of persuasion or encouragement.

With success, it seems, since it has allowed to reduce the personal consumption of 60% in three years.

The industrial companies themselves have developed alternative strategies to save water.

Engineer at the nuclear power plant of Koeberg, 30 km north of Cape town, Christopher Smith explained that they have developed a plant for the desalination of sea water for use in the cooling systems of the reactors.

“We had no choice, he had to take the bull by the horns”, he explains.

The direction of the local plant of the giant beer AB InBev has declined to comment on the consequences of the drought for its activities, but other actors in the sector have all reported that a “zero-Day” would be catastrophic.

“If there is more water, the entire food industry is going to burst”, summarizes without embellishment Raphael Clistini, a South African aged 28, who opened bars in the world.

In her new bar on the docks of the Cape, it serves a gin produced in a distillery in the city that could soon be forced to bring his water of Johannesburg, 1,400 km away.

“It will make prices rise,” sighed he already.