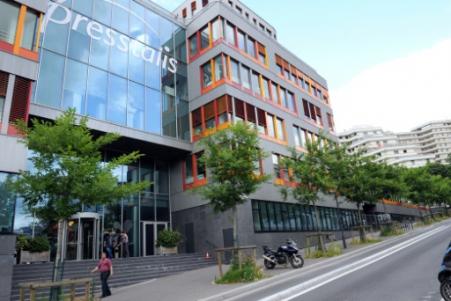 The headquarters of Presstalis in Paris on July 3, 2012 (Photo by MEHDI FEDOUACH. AFP)

Newspaper distributor Presstalis, in great difficulty, will present on Monday a restructuring plan that could result in the deletion of a quarter of its workforce, and is the subject of lively debates in the press world.

“We are going to propose a backup plan of employment, which could be between 200 and 300 people (about half of them on the e-mail Presstalis and the other trustees) a total of 1.200”, announced this week the new CEO of Presstalis, Michèle Benbunan, who is working on a turnaround plan since his arrival at the head of the group by the end of 2017.

This PES will be presented on Monday to the trade union organizations at a central committee business.

“These measures are necessary for a return to the balance of Presstalis the end of 2019,” she pleaded, trying to dispose of nine deposits in the regions “a renewed focus on distribution in the major cities of the province”.

Known to the general public, Presstalis (ex-the New courier of the parisian press, NMPP) is the largest distributor of press to the number in France, and carries over 4,000 titles up to 25,000 points of sale.

Saved in extremis from bankruptcy at the end of 2012 by its shareholders (the newspaper publishers) and the State, with tens of millions of euros of public money, and in spite of yet another restructuring in 2013, which has halved its workforce, the group is again at the edge of the abyss, on the background of the fall continued in newsstand sales, and internal and external issues.

Ms. Benbunan has confirmed that the rescue package that it negotiated with the publishers of the press and the State, will require mobilizing an additional € 190 million. “The State may be willing to advance about half of this sum in the form of a loan. It would be up to the publishers to fund the other part”-she pointed to the Echos.

But this rescue is the cause of great debate in the sector.

The Board of governors of the courier press (MHCP), the body that sets the rules for the distribution of the press, it has launched a consultation on “extraordinary measures to create the conditions for a recovery of Presstalis and the whole sector”, calling for “collective responsibility”of the actors.

They include a moratorium of transfers of securities of an e-mail to the other (to avoid that the newspapers do not leave Presstalis to its competitor, the MLP, and especially to a levy of 2.25% on the sales of newspapers and magazines, payable by all publishers.

But the publishers who have the means can escape the levy, providing repayable advances to Presstalis, a measure deemed discriminatory and unfair by some.

Independent publishers (who publish including The 1, Ebdo, So Foot, Society, America, Philosophical magazine, etc.) have formed a collective and call for the holding of the states-general of the press to find other solutions.

“We are being asked to participate in a plan and to fund so-called miracles, but the people who ask us have not seen the formation of a hole of several tens of millions of euros” in cases of Presstalis, explains to the AFP Franck Annese, co-founder of So Press, and a member of the collective, an allusion to other newspaper editors who sit in the PMT and/or are shareholders of Presstalis.

Denouncing a policy of fait accompli, the group calls for “transparency” on the courier, and wants people to “take the time to review this archaic system,” stresses Frank Annese.

The sector is governed by the law Bichet, 1947, that the government is already committed to reform.

“It is necessary to save the system because its collapse would be terrible for the entire industry. We, daily, participate, and support the plan, but all efforts will be useless if this system completely kafkaesque and out of breath is not changed”, – emphasizes his side Marc Leafy, group managing director of Le Figaro.

The Association for the future of the publishers of the press, which includes newsagents, has called “for the abandonment of this project, as opposed to the union of the merchants of the press, Cultural Press, which supported the measures.