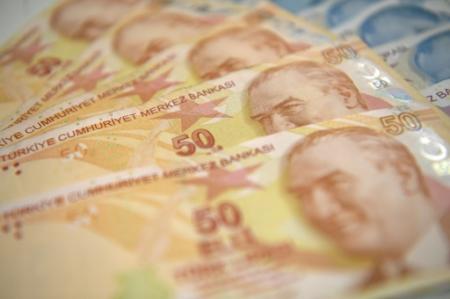 Tickets of Turkish lira on the 23rd of may 2018 in Istanbul (Photo by OZAN KOSE. AFP)

The central bank of Turkey meets Tuesday to decide whether or not to increase its interest rates to combat inflation, a major test for the credibility of this body after the re-election of president Erdogan, who increasingly anxious about the markets.

This meeting of the monetary policy committee of the central Bank of Turkey (CBRT) occurs at a time when inflation has exceeded 15% year on year in June, reinforcing the concern of observers who point to a slowing of the Turkish economy.

This is the first time that the CBRT meets since the double presidential and legislative elections of 24 June, which was won by Recep Tayyip Erdogan, who was re-elected for a mandate with powers greatly enhanced thanks to a constitutional revision.

After his election victory, Erdogan gave a cold sweat to the markets by entrusting the portfolio key Finance his son-in-law, Berat Albayrak, the ex-minister of Energy, 40 years old.

Although the Turkish economy displayed a growth rate for 2017 to rival many countries (+7.4 per cent), it shows several signs of overheating, with inflation on a year-to-15,39% in June –a record since 2003– and a shakeout continues in the Turkish lira.

Faced with this situation, the economists argue that it is necessary to raise the interest rate of the central bank, whose main policy rate, the refinancing to a week, amounted to 17.75%. The CBRT will announce its decision at 11: 00 am GMT.

But Mr. Erdogan, who describes himself as an “enemy of interest rates,” recommends just the opposite, and now more than ever a free hand to impose his unorthodox views on the economy.

Turkey is formally passed two weeks ago a parliamentary system to a presidential system, which makes Mr. Erdogan, the sole holder of executive power. This transition has in particular removed the post of Prime minister.

The Turkish president was granted in the wake of a decree by the prerogative of appointing the governor of the central bank, indicating its willingness to have the hand on the economic levers.

To try to reassure the markets and foreign investors who doubt more than ever the independence of the central bank, Mr. Albayrak has multiplied declarations soothing.

After talks on Monday with experts, he indicated on Twitter (NYSE:TWTR) that he will organise regular meetings with economists.

And quoted by the Turkish media, Mr. Albayrak said on Sunday it had no intention of “fighting with the market”.

The government has not renewed the last week the state of emergency that was in force since the attempted putsch of July 2016, and of which the markets were demanding, with insistence, the exercise.

Despite the hostility of Erdogan towards the interest rates, many economists expect that the central bank continues in this direction Tuesday, anticipating an increase of between 75 and 150 basis points.

“We expect an increase of 100 basis points and, in view of the abrupt rise in inflation over the last two months, this seems to be the minimum acceptable for the markets,” says AFP Jason Tuvey of Capital Economics.

“In short, concerns about the independence of the central bank and its ability to tackle inflation would be revived”, said Mr Tuvey. “A winding-up of the Turkish lira would follow inevitably and would force the CBRT to raise rates in an emergency”.