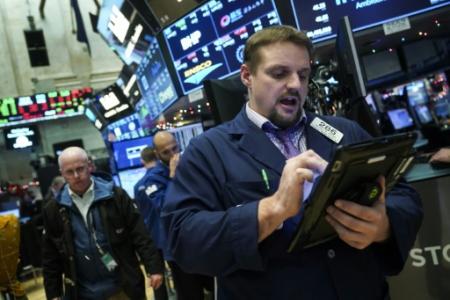 The New York stock Exchange ended in the red Wednesday, the marketplace is leaving to win by nervousness in the face of fears, of battles, of trade between the United States and its partners and to the permanent state of unrest at the White House.

As before, the indices began the session on the rise before gradually losing ground.

“This volatility reflects the nervousness of the market,” said Kate Warne of Edward Jones.

“There are still a few months, investors reacted little to the indicators and the information emerging during the session because they were convinced that interest rates would remain low and that growth is likely to remain strong enough to fuel the progress of actions”, she stressed. “At this moment, they are pondering really about the direction that will take the market.”

On Wednesday, the recent decisions of the White House on its trade with other countries were again on the front of the stage.

Wall Street was not expecting such protectionism and fears of retaliatory measures,” said Ms. Warne, referring to the import taxes of steel and aluminum, or the veto of Donald Trump to buy us-based Qualcomm (NASDAQ:QCOM), Broadcom (NASDAQ:AVGO).

According to several american media, the administration is also considering imposing tariffs on chinese imports equivalent to $ 60 billion.

The many changes made recently within the american administration, including the departures of the chief economic adviser Gary Cohn last week, and the boss of american diplomacy Rex Tillerson on Tuesday, is also fuelling the volatility of the market.

The announced replacement of Mr Cohn by Larry Kudlow, a conservative economist and tv personality, did not induce specific reaction on the market.

The indices had enjoyed in the beginning of the session indicators in half-tone on the u.s. economy: retail sales are a part remained in the red in February for the third consecutive month, while producer prices have, over the same period, increased by 0.2%.

“Inflation is clearly not a concern currently,” said Ken Berman of Gorilla Trades. The u.s. central bank “is not expected to accelerate interest rate hikes in 2018, which should please investors”, he added.