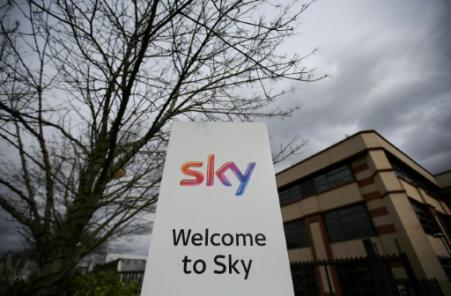 The group headquarters of Sky tv in Isleworth, on 17 march 2017 in the west of London (Photo by Daniel LEAL-OLIVAS. AFP)

With their deep pockets, the tech giants give cold sweats to media groups and telecom, engaged in major maneuvers to resist. The nerve of the war? Content.

The film has the air of déjà-vu, as the giants of Silicon Valley have a habit of upsetting large swathes of the economy.

Last episode to date: the negotiations between 21st Century Fox and Disney, which is interested in several segments of the group owned by Rupert Murdoch, in particular the movie studios and the television group Sky.

As for the telecoms operator AT&T, he has been trying for months to finalize the redemption of the group of media and entertainment Time Warner (studios Warner, CNN and HBO). A mega-merger suspended the green light from us competition authorities for the time being reluctant.

These large maneuvers are increasing as consumers are moving away from cable tv and satellite –very expensive in the United States– for on-line content on-demand, via platforms such as Netflix (NASDAQ:NFLX), while tech giants such as Facebook (NASDAQ:FB) or Apple (NASDAQ:AAPL) commit themselves to the production of content.

“It’s a game of musical chairs incredibly complex,” says Robert Thompson, head of the department “Television and popular Culture” at the University of Syracuse, in the eastern United States.

“Everyone wants to ensure that when the music stops, there will be enough content and enough people to produce it,” says the university.

The combat is so fierce that some experts dub the “Game of Thrones”, in reference to the HBO series the global success, which tells of the bloody fighting between families powerful to go up on the iron throne.

The platforms of streaming, such as Amazon (NASDAQ:AMZN) Video or Netflix have already largely revolutionized the sector: according to the investment company Raymond James, 31% of Americans say that these streaming services are their first source of video content.

The video platform YouTube, owned by Google (NASDAQ:GOOGLE), accelerates in the production of original content while Apple has, according to press reports, already provided a billion dollars for the creation of programs. Facebook also has big ambitions.

Video platforms are also relying more and more on original content to attract and retain consumers.

Even if, for the moment, subscriptions, cable and satellite are still resisting this respect, the changes in consumer habits are a threat to the traditional players in the sector, ” says Bruce Leichtman, an analyst specializing in media and entertainment.

So, these are left having to sell, diversify, or grow up to face the technology groups, ” says Richard Greenfield, analyst at BTIG Research.

According to him, the objectives of Disney –buy the film studios and participation in the group of european tv Sky owned by 21st Century Fox, but also soon launch its own streaming services– may not be sufficient.

Disney, which owns the television group ABC, as well as the channels of ESPN sports, seems to be always chained “platforms for traditional distribution,” even if he managed to buy the assets of the Fox that covets, judge Mr. Greenfeld.

“The fundamentals of the industry are deteriorating more and more every day,” he continued. “During this time, the giant technology and platforms (video) are in full form and strive to put the hand on the time that consumers spend on traditional media”, states Mr. Greenfeld.

“Grow, make savings, and to place themselves in a better position to negotiate” the price of the content, also highlights Brian Wieser, analyst at Pivotal Research.

Anyway, even if the traditional sector of media and entertainment is crossed by great upheavals, technology companies still have things to prove, said Mr. Thomson.

Because of their culture of origin, are the “geeks” –geniuses of math and computer engineers– far from the world of entertainment.

For example, point to the media consultant Alan Wolk, YouTube (Google) “crashed” with the original programs.

“They had hired a person with experience (in the field) and they have under-estimated the know-how’, he thinks.

But things are changing, he noted, however, noting that Apple, for example, has “cleverly” employed to people in the area.