Altria Group, Inc. (MB), the Marlboro cigarette maker, is setting up for a massive move in the wake of the publication of its quarterly earnings report tomorrow morning. Based on the share price chart, shares could be in for a 20% swing in either direction in the coming weeks – and the gains are likely to be what sets it off.

Altria shares have been stuck in an ascending triangle pattern over the last few months, but a storm is imminent. That is why, the announcement of the results will probably be the starting point for the 20% move – if it does not all happen tomorrow, when the income is reported. 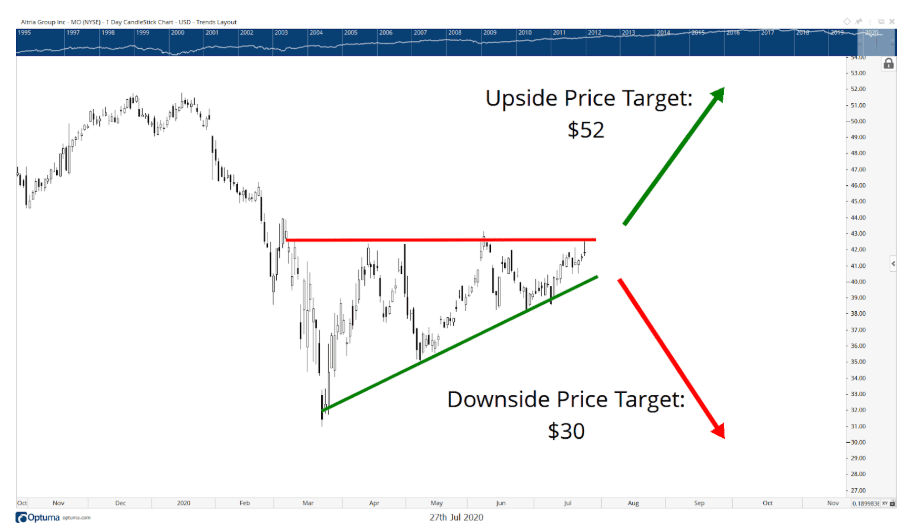 I’ve followed the triangle patterns closely, because of all the information that he gives us. First of all, we know that the expected move by simply taking the height of the pattern. With a high around 42 $and the low $32 in the triangle pattern, the move is $10 per share, or approximately 20% of the current price. This gives us a higher target price of $52 per share and a decrease of the target price of $30 per share.

The most difficult part if to decide the manner in which the trigger occurs. I like the trade triangle patterns after the escape. We miss out on some of the initial surge, higher or lower, but once the break occurs, we know that the target price, we can capitalize on it. All you have to do is follow the key support zone (in green) and resistance (in red), for confirmation of the direction.

However, there is a general rule of thumb for the triangle patterns tend to be continuation patterns. This means that the stock is expected to move in the direction of where it was before the pattern formed. For Atria, the stock was heading lower before this period of consolidation.

Based on the ascending triangle pattern, we know to expect a large move in Altria stock in the coming weeks. While we are not sure that the direction of the escape will be, the lower is the more likely price target at this point. With the gains tomorrow, this stock is made out of this pattern and begin its tariffs to 20% after the announcement of the results.