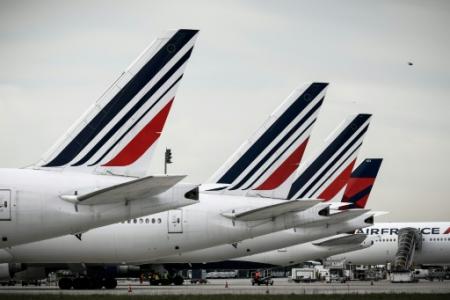 Of the Air France aircraft on the tarmac of the airport of Charles de Gaulle on 11 April 2018 in Roissy, north of Paris, france (Photo by Philippe LOPEZ. AFP)

The inter-union of Air France (PA:AIRF) has maintained Friday its next four calls in the strike, which on Tuesday and Wednesday next, at the end of two days of a wage negotiation with management, which will resume Monday morning, a-t-on learned from the unions and management.

Seven days of strike action have taken place since February 22. Four others are scheduled in April: Tuesday and Wednesday next, and then on April 23 and 24, the following week.

The inter-union calls for a 6% general increase, effective this year.

The management of Air France has stated his side have proposed for 2018 a “general increase to 2%”, as well as a “general salary increase 3.6%” on the period 2019-2021 “guaranteed within the framework of the pact for growth”. “The salaries would be increased, on average, over the period, from 11% to 12%” (increases in general, individual and automatic), points out the direction in a press release.

Criticizing the willingness of management to focus the majority of his efforts in 2019-2021, while unions are demanding a catch-up for the efforts made in recent years, the intersyndicale has estimated that “come to the negotiating table with a proposal as indecent is not respectful vis-à-vis employees”.

“Refuse to compromise, and continue forward flight in this strike, it is taking a heavy responsibility vis-à-vis the employees of the company, and customers who are living on Air France”, said the executive, who considers that the strike has already cost 170 million euros to the company.

A resumption of negotiations with the pilots ‘ unions, who claim for them a wage increases of 10.7%, was originally scheduled for Monday.